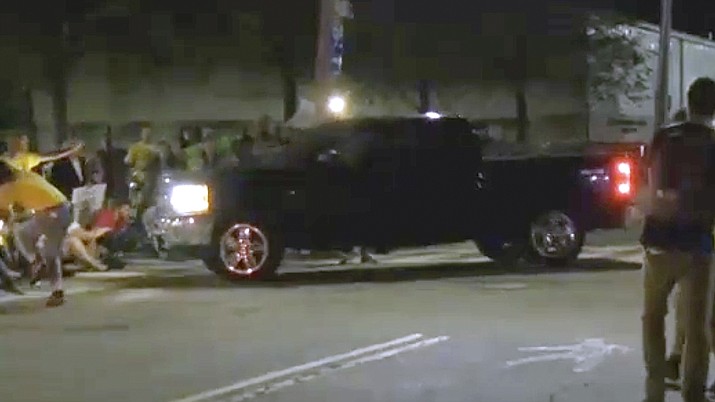 In this still image from video provided by WLNE-TV, protesters blocking an entrance to the Donald W. Wyatt Detention Facility begin to move as a pickup truck approaches, Wednesday night, Aug. 14, 2019, in Central Falls, R.I. The group, which was protesting federal immigration policies, said at least two people were injured. Rhode Island's attorney general said he is investigating the incident. (WLNE-TV via AP)MANDATORY CREDIT

PROVIDENCE, R.I. — Rhode Island's attorney general and state police launched investigations Thursday after a truck drove through a group protesting federal immigration policies at a detention center, which has since placed an employee on leave.

At least two people were injured, one seriously, Wednesday night outside the Donald W. Wyatt Detention Facility in Central Falls, according to the Jewish youth movement Never Again Action. The center is used by U.S. Immigration and Customs Enforcement.

A video posted by the group on social media shows a black pickup that protesters say was operated by a uniformed corrections officer driving up to an entrance blocked by demonstrators. The vehicle stops before again moving forward.

Never Again Action said Jerry Belair, 64, of Warren, suffered a broken leg and internal bleeding and was being evaluated at a hospital for a possible back injury. It didn't identify the other person it said was injured by the truck, but said three other demonstrators were treated after inhaling pepper spray they say prison personnel used to disperse the crowd.

Democratic Attorney General Peter Neronha said in a statement that it was unfortunate and that his office was gathering facts.

Warden Daniel Martin said Thursday that an employee identified as Capt. Thomas Woodworth had been placed on administrative leave as the prison investigates. Martin did not explicitly say that Woodworth was the driver, and Wyatt spokesman Chris Hunter said the internal probe would address that and other questions.

Martin said the investigation will examine "Wyatt correctional officers' response and the Wyatt's protocols regarding protest activities outside of the facility." The prison "supports the First Amendment right of citizens to peacefully protest on public property surrounding the facility," he added.

Democratic Gov. Gina Raimondo took to Twitter to acknowledge public outrage over the standoff and said she shared it.

"Our state and our nation were built on the idea that everyone has a right to express their opinion publicly and peacefully," she said.

"The right of a free people to protest their government is fundamental to our democracy," Cicilline said, urging Wyatt officials to fully cooperate with the investigation.

Never Again Action said in a statement that about 600 people had gathered at the prison and that about 30 protesters had blocked entrances for several hours before the confrontation with the truck driver.

Eighteen people were arrested there last month. The charges were dismissed after protesters agreed to make donations or perform community service.