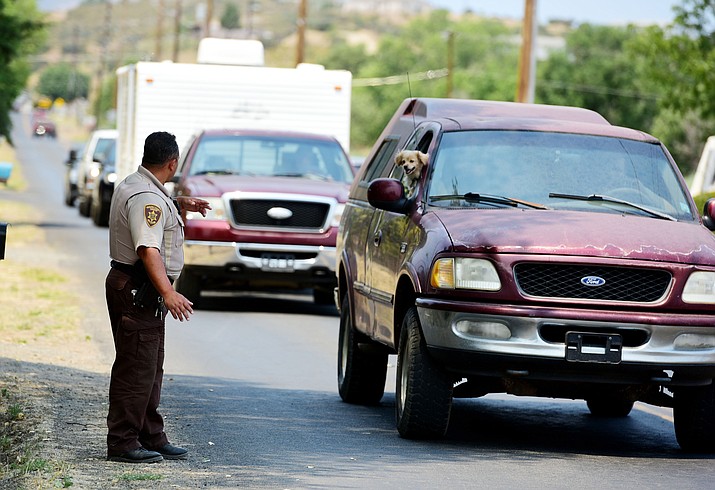 A YCSO Sheriff’s deputy directs traffic leaving the Blue Hills area of Dewey-Humboldt after a mandatory evacuation notice was given for the area Wednesday, June 28. (Les Stukenberg/Courier) 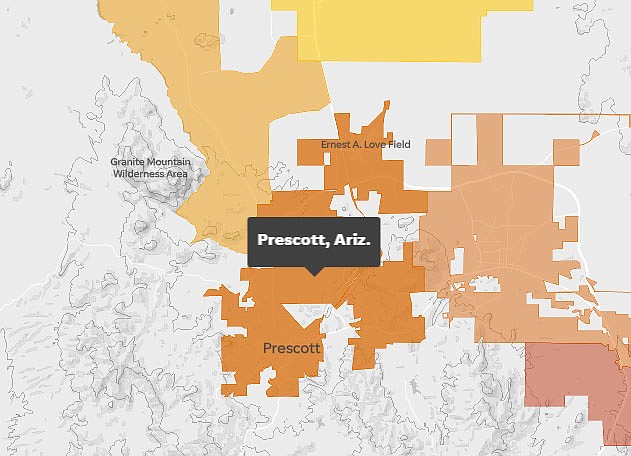 A recent newspaper article set forth the risks of wildfire hazard potential for small communities, comparing them to those of Paradise, California. The deaths of 86 people and destruction of almost 19,000 buildings this past November wiped out that town.

The Camp Fire began when winds snapped a power line, sending sparks into the dry grass and spreading into pine trees eight miles from the town of Paradise.

Some of the risk factors for wildfire hazard potential (WHP) in Paradise were less than what Prescott residents face, wrote Pamela Ren Larson and Dennis Wagner in an Arizona Republic/USA TODAY article dated July 22, and updated July 28.

Because of its population, Prescott’s households surpass the study’s limit of 15,000 households considered “small communities.” Prescott’s findings were not included in the report’s analysis; nevertheless, here is what the study found.

Evacuation routes are determined by the direction and speed of the approaching fire. Stop-and-go traffic on roadways, oncoming emergency vehicles, smoke, and power lines and trees blocking streets all contribute to how quickly residents can access and use evacuation routes.

The analysis measured evacuation constraint as “the ratio of total households to major roads that exit a community.” Paradise had six potential escape routes along major exit roads. The ratio of households to exit roads was 1,818, even though one road had a sign stating “Do Not Travel.”

Chino Valley: Highway 89 passes through Chino Valley and serves as the only major roadway servicing the community.

Prescott: Highways 69 and 89 pass through Prescott and serve as two major roadways servicing the community.

Dewey-Humboldt: Highways 69 and 169 pass through Dewey-Humboldt and are the main roadways servicing the community.

Prescott, with its greater number of households, had a value of 2,574. The median for small towns was 110.

“Evacuation routes are challenging and not generally pre-determined due to the fact that we must be able to adapt to the given emergency,” said Ron Sauntman, Yavapai County Emergency manager with Yavapai County Public Works Department.

Older residents often rely on others for transportation, and they may not be signed up for alert notifications. In Paradise, 10% of residents were older than 75. The median for small communities is 5.6%

“We have resource use agreements and access to specialized vehicles and staff that are able to enter into areas of disaster and support evacuations in coordination with the first response organizations. In addition to this, many care facilities have pre-arranged agreements with private organizations to support transport needs,” he said.

Some of the most vulnerable residents have disabilities that make communication or evacuation more difficult. These include hearing and vision, cognitive and ambulatory disabilities. One-quarter of Paradise residents had a disability; the median for small communities is 13.5%.

Prescott’s residents with a disability is about 18%.

Paradise had the ability to send emergency alert messages to cell phones, but had never activated the system and did not send an alert.

The analysis incorrectly reported that Prescott does not have an alert system. The Yavapai County Sheriff’s Office (YSCO) has a Code Red system that uses contacts via email, landline, cell phone, texts, and support the AFN community. 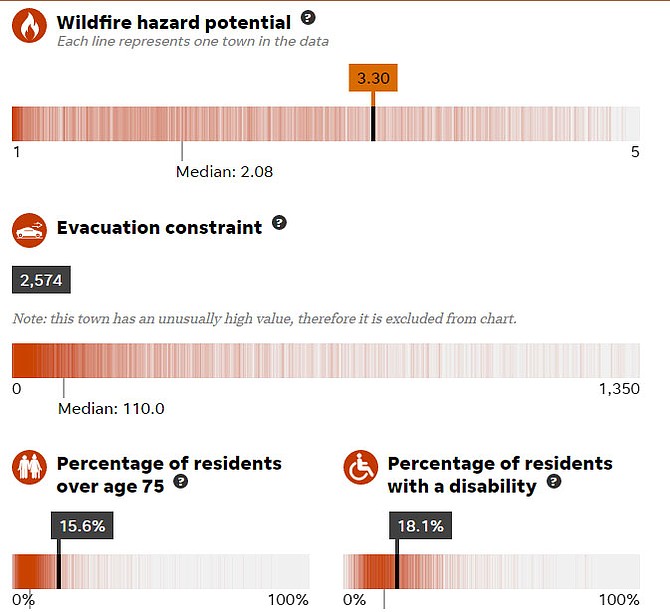 A profile of the City of Prescott, Arizona.

Sauntman said he was unaware of how many residents are signed up for the alert; he encourages everyone to do so.

YSCO also has more than 500 volunteers for evacuation support and coordination, including crowd/traffic control, back-country rescue, door-to-door search and rescue, and technical rescue. The county also uses amateur radio operators with specialized emergency communications training who can operate in the field to support secondary communication needs.

Set closely together, some constructed with flammable materials, mobile homes are at greater risk for fire. Paradise had 30 mobile home parks with 1,300 households, or one in every eight households, 12.5%.

Prescott’s number of households living in mobile home parks is 4.9%.

Mobile homes in Yavapai County fall under the management of the Development Services Department, which uses the 2018 International Property and Maintenance Code, Sauntman said. In addition, all fire districts and departments use the International Fire Codes for their jurisdictions.

Socioeconomic levels may contribute to greater risks, and include those who cannot afford flameproof homes, own vehicles, or don’t have the physical ability or funds to maintain safe yards. Some have no access to internet or cell phones to connect to warning systems.

“Abandonment or doing away with the WUI Code will place this great community at even greater risk than what exists today,” Light said. “This community’s survivability and, equally important, the regions’ firefighters survivability, depends on it.”

Residents are urged to visit the Yavapai County Emergency Management Regional Alert Information website: regionalinfo-alert.org. Residents can register phone numbers (cell and landline), for text, email, and TDD/TTY systems for the deaf and hard of hearing. When the call appears on caller-id, it will display the YCSO business number: 928-771-3260. Never reply to Alert message emails or text messages. Instead, call 928-771-3260.

Consider following YCSO on Twitter at twitter.com/YavapaiSheriff and on Facebook at facebook.com/YavapaiCountySheriff. Not only do these sites provide general information of community interest, but YCSO now shares Code Red alerts on these accounts when the incident involves large community emergencies like fires and flood.

The speakers will present research using more than 100 tree ring samples and other techniques to reconstruct fire records from 1700-1879 in the Prescott and Tonto National Forests.