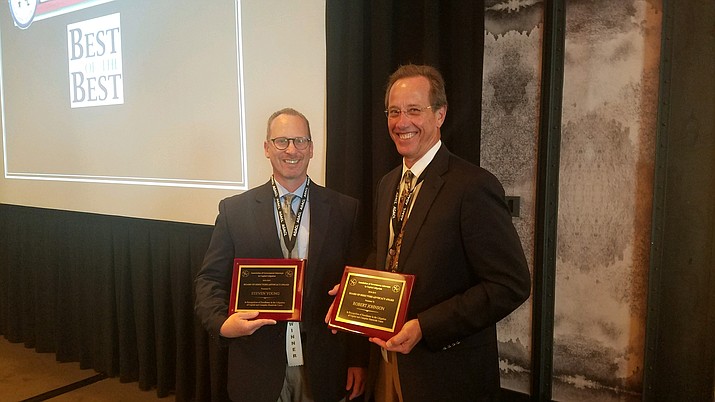 The awards ceremony took place during the national conference of the Association of Government Attorneys in Capital Litigation in Austin, Texas, from Aug. 7 to Aug. 10.

Young, lead counsel, and Johnson, second chair, were commended for their successful prosecution of Kenneth Wayne Thompson II for the 2012 double murder of a couple in their Prescott Valley home. Yavapai County Attorney Sheila Polk praised the professionalism and fortitude of the two prosecutors throughout the long trial.

“These two prosecutors conducted themselves as true professionals every step of the way,” Polk said. “Thanks to their dedication, the murderer was brought to justice and the surviving family members found some peace.”

In announcing the award, the conference presenters noted the perseverance of the two prosecutors through several years of pre-trial litigation, with over seventy pre-trial motions and many hearings. The trial finally commenced on January 30, 2019 with testimony from numerous witnesses and about three hundred trial exhibits.

The jury returned verdicts of guilty on multiple counts of first degree premediated murder, felony murder, burglary, arson, criminal damage and tampering with physical evidence. On March 28, 2019, after the penalty phase of the trial, the parties made their closing argument to the jury. After three days of deliberation, and nearly three months of trial, the jury returned their verdicts of death on each count of first-degree murder.

The award-winning prosecutors were gracious in sharing credit to the entire prosecution team.

“Bob and I had tremendous support from our paralegal Alisha Showman, our legal assistant Nancy Pazcuzzi and our victim services representative Tony Camacho, in addition to many others in the Yavapai County Attorney’s Office,” Young said. “We want to especially thank DPS Trooper Matthew Bratz, Prescott Valley Police Officer Matt Hepperle, and Detective Ed Bills of the Yavapai County Attorney’s Office for their great work investigating and preserving the evidence in this case.”