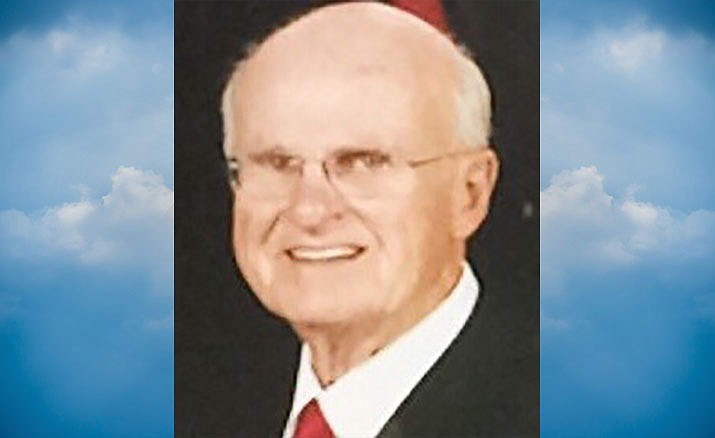 Edgar Paul Browning was born on Jan. 13, 1929, in Santa Ana, California, to Felton B. and Mildred Paul Browning, and died peacefully on July 20, 2019, in Prescott, Arizona, at Marley House, the hospice home his son, Chris, designed.

He married Norma Earlene Whiteside on Sept. 5, 1953, in Clarksville, Iowa.

He was predeceased by his parents, sister Louise Weber, son Chris and daughter Jancie Lee.

After a short teaching career at Fresno College, Paul became an engineer for John Deere & Co. in Waterloo, Iowa, for 32 years, retiring in 1984. During that time, he had a number of patents credited to him and traveled to China, Russia, Germany and Japan to share agricultural technology. Upon retiring, Paul embarked on a new career path that continued until the time of his death, buying and managing commercial properties in Prescott and Prescott Valley, gaining the respect of his tenants as well as the design, construction and financial community. His spreadsheets, pie charts, in-depth analyses, business acumen, and, of course, his notorious buckets hats were legendary, and he could outwit and outlast people 60 years his junior.

Paul was involved in many organizations, holding leadership roles in Rotary International, serving on the boards of Sartori Hospital in Cedar Falls, Iowa, and Yavapai Regional Medical Center in Prescott, and serving as an elder at Cedar Heights Presbyterian and Trinity Presbyterian churches.

After exploring communities throughout the West, Paul and Norma chose Prescott in 1990. They enjoyed hiking in their earlier years and playing duplicate bridge regularly. They loved to cruise, traveling all over the world. Paul’s passion for cars was passed on to his son Greg, with whom he bought and restored a 1965 Corvair convertible.

Paul was happiest when surrounded by his family. As they were spread all over the country, he brought them together with cruises. He finally convinced three of his children to move to Prescott to help with his development projects. Friday social hours became a regular tradition on the deck of his beautiful home, where everyone gathered to enjoy the amazing view and discuss the week. It was only fitting for him to be surrounded that last Friday by his kids and grandkids for one last gathering.

In lieu of flowers, please honor Paul’s life of community service by giving to Marley House in Prescott, Prescott People Who Care, or the Yavapai County Humane Society.

All are invited to celebrate Paul’s life on Saturday, Aug. 17 at 12:30 p.m., at Trinity Presbyterian Church, 630 Park Ave., Prescott with a light lunch following.