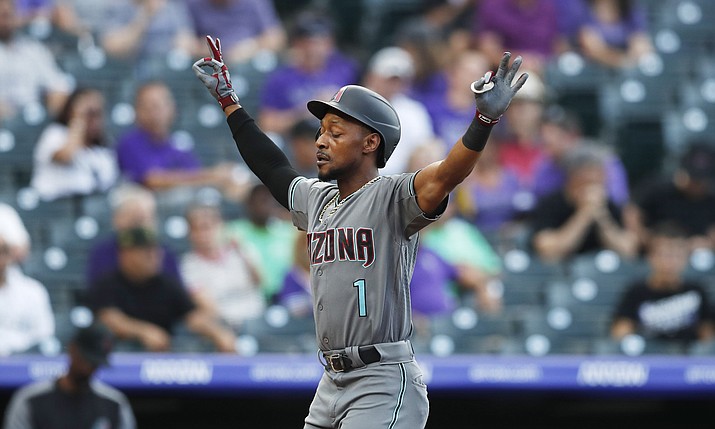 DENVER — Jarrod Dyson homered on the second pitch of the game during a five-run first inning and was later involved in a quirky double play as the Arizona Diamondbacks cruised to a 9-3 win over the Colorado Rockies on Tuesday night.

The strangest play of the night was on an inning-ending double play in the eighth that involved tagging out two Diamondbacks runners caught in rundowns. With runners on first and third, Dyson grounded a ball to first baseman Daniel Murphy, who trapped Ahmed between third and home. Ahmed was eventually tagged out and Dyson, who had broken toward second, eventually was tagged out going back to first.

The play was officially scored almost like the winning lottery numbers: 3-4-3-1-8.

Ahmed finished a double shy of the cycle in sending the Diamondbacks to their fifth straight win over Colorado. They’re averaging 5.67 runs a game against Colorado since 2011, which marks the highest average of any team against a divisional opponent over that span.

This was a rough outing for the Rockies on “Bark at the Park” night at Coors Field, where fans brought their dogs and a pregame pup parade was held around the warning track.

Wearing teal-colored cleats, Arizona starter Zac Gallen threw four solid innings before his pitch count reached 90 and he was taken out. The right-hander allowed two runs in his second start for Arizona since being acquired from Miami on July 31.

Rockies catcher Dom Nuñez hit a solo shot in the eighth to become the seventh player in franchise history to homer during his major league debut. Nunez had his contracted selected from Triple-A Albuquerque before the game.

The role of Diamondbacks outfielder Adam Jones figures to diminish a little more with Josh Rojas added to the team.

“He’s been more than understanding. I don’t think he necessarily likes it but who does when your playing time gets taken away from you?” manager Torey Lovullo said.

The 36-year-old was hitting .222 with six homers this season.

Nuñez found out he was being called up when his Triple-A manager Glenallen Hill called a postgame team meeting in the clubhouse.

“He looked over at me and said, ‘Nunez, you’re going to the big leagues,’” he recounted. “The whole team erupted.”

Nuñez was picked by Colorado as an infielder in the sixth round of the 2013 draft. He switched to catcher the following season.

The 24-year-old had about a dozen family and friends in attendance.

Diamondbacks lefty Robbie Ray (10-7, 3.99 ERA) makes his fifth start this season against Colorado on Wednesday. The Rockies will counter with lefty Kyle Freeland (3-10, 7.06).

Rockies: Gray hurt his ankle when he slipped on the dugout steps in San Diego last week. Gray will throw a bullpen session Wednesday and could start Friday or Saturday.