Talk of the Town: Shooters’ motives more complicated than a single purpose 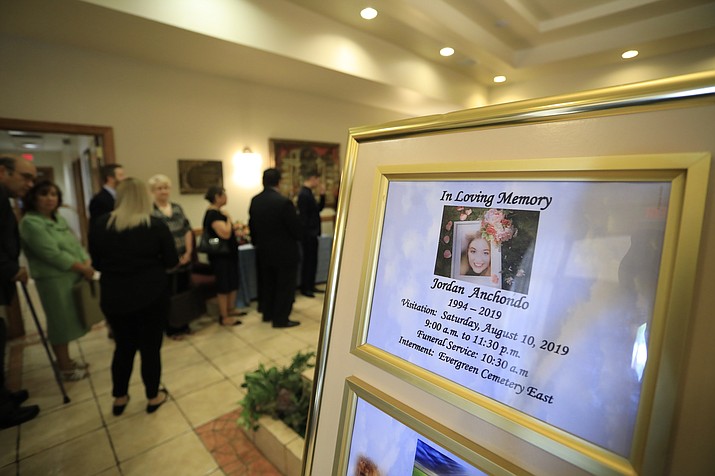 Mourners gather to attend the visitation services for Jordan Anchondo at San Jose Funeral Home in El Paso, Texas on Saturday, Aug. 10, 2019. Andre and Jordan Anchondo, were among the several people killed last Saturday, when a gunman opened fire inside a Walmart packed with shoppers. Authorities say Jordan Anchondo was shielding the baby, while her husband shielded them both. (AP Photo/Jorge Salgado)

Understanding the motives of a person who apathetically and randomly kills innocent people is more complicated than identifying a single purpose or driver. Although many will claim a racist motive or a hate motive, the reason can be different than the cause.

My assignment in Washington, D.C., was investigating Domestic Terrorist organizations. I had investigative responsibility for white supremacist organizations, and therefore have some insight into the personality of the members of these groups. All hate, anti-government, left-wing, right-wing groups at some time make their way to Washington, D.C. When they did, I would integrate myself into the group to adequately assess their collective personality. Standing among these groups and having conversations with members can provide in-depth observation and intelligence about these groups. My assessment then, and it remains the same, is that these members are by and large outcasts looking for a social connection. As humans, we are social beings. We require interaction with other humans to be fulfilled and feel part of the human environment. Many of these groups are made up of members who have spent a childhood of isolation with limited social interaction.

When they come across a group, whether through recruitment or mutual acquaintances, they immediately feel a sense of belonging unlike they have ever felt. Not unlike high school students going off to college, they want to be accepted by their new friends in their new environment. They begin to behave in a way that they have not acted in their previous life. Their desire to be part of a group and be accepted becomes paramount.

Although the shooters in both El Paso, TX and Dayton, OH fit the anti-social aspect of the criteria for being part of an underground group, they do not meet the racists or white supremacist criteria. Although Patrick Crusias in El Paso is anti-immigration, it is not a hatred of Hispanics, but hatred of policies that he believes are anti-American. He makes no derogatory statements about blacks or Jews but only about the lack of control of the border and Mexicans. White supremacy groups do not pick and choose who they spew their non-white hate towards, they hate non-white, ALL non-white.

Lastly, generally speaking, white supremacists are not consistently violent. They speak out and hold meetings but are not necessarily violent. There is no connection between the shooters in Dayton and El Paso to a supremacist group, nor did they espouse Aryan Nation or Skinhead type ideology or affiliation. Any affiliation with known and designated white supremacist Domestic Terror organizations would have put them on the FBI’s radar in their respective territory.

These shooters are an example of necessary anti-social behavior not unlike Islamic terrorists who feel they are justified in their action. Additionally, they were allowed to engage in concerning behavior, which went unaddressed many times. Ultimately, the shooters did not get the response they were expecting. In their mind, no alternatives existed, and thus, they no longer feared the consequences of their actions. This process is a typical process of Justification, Alternatives, Consequences, and Ability (JACA) that violent offenders work through. They both found the opportunity and sadly committed the act that they had fantasized about in their isolated world.

Steven R. Hooper is a professor in the College of Security and Intelligence at Embry-Riddle Aeronautical University in Prescott.