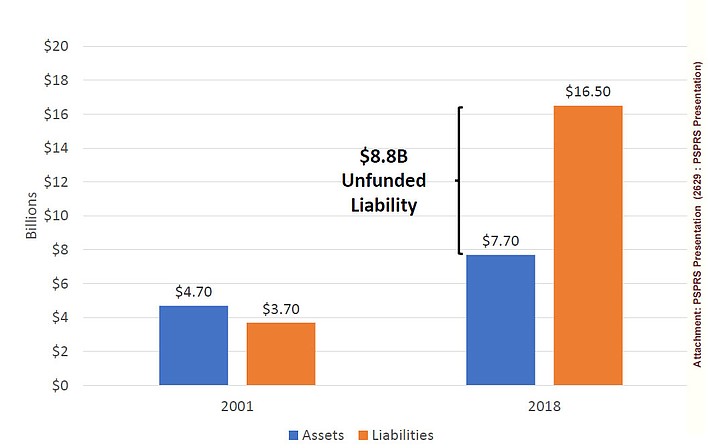 A bar graph shows liabilities versus assets for the City of Prescott. The City Council will conduct three meetings on Tuesday, Aug. 13: A 10 a.m. closed-door executive session; a 1 p.m. study session; and a 3:30 p.m. voting session. All three meetings will take place at Prescott City Hall, 201 S. Cortez St. A presentation on the Public Safety Personnel Retirement System (PSPRS) is among the items on the council’s 1 p.m. study session. (City of Prescott/Courtesy)

Local discussions on the City of Prescott’s pension debt regularly generate questions about the Public Safety Personnel Retirement System’s investment record, and City Council members will have an opportunity this week to address their questions to top PSPRS officials.

A presentation on the Public Safety Personnel Retirement System (PSPRS) is among the items on the council’s 1 p.m. study session.

A memo to the council states that PSPRS Chair Will Buividas and Trustee Scott McCarty would be on hand to make a presentation “about the ongoing and future direction of PSPRS,” as well as to address any questions from council members.

In a 2017 election, Prescott voters approved a 0.75% sales tax increase to help pay down the city’s PSPRS unfunded liability, which reached a high of $86.4 million.

This past year, with the revenue from the sales tax and other city contributions, the city’s debt had been reduced to $69 million.

Still, questions have arisen at past council meetings about PSPRS’s investment performance, and how it might affect the city’s ability to pay down its debt.

The PSPRS presentation, which is included in the council informational packet, touches on: the system’s overall debt; the continuing challenges with the unfunded liability; the system’s investment history since 2012; recent changes made by the new board; and recommended practices for the participating entities.

In other action at the 1 p.m. study session, the council will:

A city memo notes that city officials attended a training on creating a 2020 Census Complete Count Committee, and received an update on the 2020 Census timeline.

The memo adds that the Yavapai County Board of Supervisors has passed a resolution to create a Census 2020 Complete Count Committee, “and they anticipate that the 2020 Census will reveal a large increase in Yavapai County’s population since the 2010 Census.”

The purpose of this week’s City Council agenda item is “to update the council and mayor on local activities taking place and explore options for maximizing participation in Prescott,” the memo states.

• Discuss sewer requirements related to the water policy changes that are under review by the city.

The discussion will examine proposed sewer requirements such as: mandatory sewer connection for new construction; a sewer availability connection requirement for existing water users on septic; penalties for failure to connect; financial assistance possibilities; and potential impacts to the creeks and waterways.

The council’s 10 a.m. executive session will include discussion about Eviation Aircraft, as well as airport terminal expansion issues, while the 3:30 p.m. voting session will include consideration of the revised preliminary plat for the Antelope Crossings subdivision, extending the boundary of the subdivision and adding 42 lots to Phases 4 and 5.