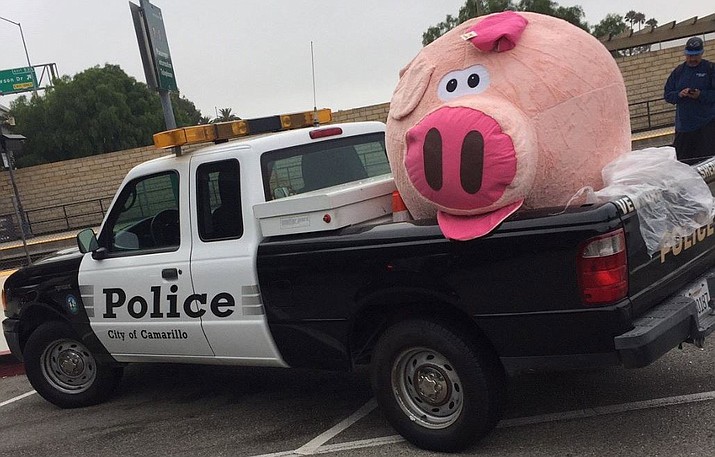 CAMARILLO, Calif. — A giant stuffed pig found at a Southern California train station is a carnival prize that was apparently too much to handle.

The porker filled a sheriff’s pickup when deputies removed it from the Metrolink station in Camarillo on Tuesday.

The Ventura County Star went in search of its origins and ended up at the county fair.

The trail led to a BB shooting gallery where fairgoers win a prize if they obliterate a star on a paper target.

Booth worker Jonathan “JC” Costa remembered the girl who succeeded. She first claimed a giant stuffed dragon but discovered it had a hole and traded it in for the pig.

The girl apparently rode the train to Camarillo and got into a rideshare, abandoning the pig because it wouldn’t fit.

Someone abandoned their therapy pet at the @Metrolink station in Camarillo last night. Well, a pigture is worth 1,000 oinks. Petunia has been relocated to @camarillovcso #HugaPig #AdoptDontShop #sheriffvc pic.twitter.com/9e8VBYLtLU