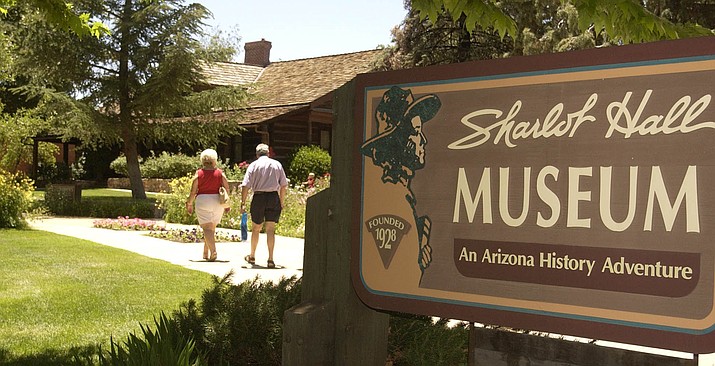 Hundreds of museums celebrate the American West, but True West magazine identifies Sharlot Hall Museum in Prescott as one of the best. The Museum is No. 7 in the publication’s Top 10 Western Museums of 2019.

“Sharlot Hall Museum is a remarkable repository of documents, artifacts, buildings and exhibits that tell the story of the territorial days in Arizona,” said Bob Boze-Bell, executive editor of True West. “It’s truly deserving of recognition as one of the top Western museums.”

“We are the only museum in Arizona that presents the complete history of the state,” said Fred Veil, executive director of Sharlot Hall Museum, “from its prehistoric roots to the creation of the Territory, the founding of Prescott (its first capital), through statehood and its subsequent development and evolution into the early 20th century.”

“We showcase Arizona and its Western heritage,” adds Veil, “with exhibits in all our buildings that feature our prehistory, as well as our pioneer lineage and culture.”

The magazine editors and two-time Spur Award-winning writer Candy Moulton selected the winners for this annual award based on extensive travels, research and firsthand experiences in visiting dozens of Western museums each year.

“The exhibit ‘Willard J. Page: Artist on the Southwest Road’ at Sharlot Hall Museum hits on all cylinders,” says Moulton, as one that balances artistry and history, with his innovative marketing while preserving the cultural setting of his day.

With its 11 exhibit buildings (seven of which are historic) amid the park-like campus only two blocks west of the downtown courthouse plaza in Prescott, the Sharlot Hall Museum is a “Must See” destination “that does an especially outstanding job of preserving and showcasing the legacy of the West,” True West editors added.

The entire list of best Western museums is in the True West’s September 2019 edition.