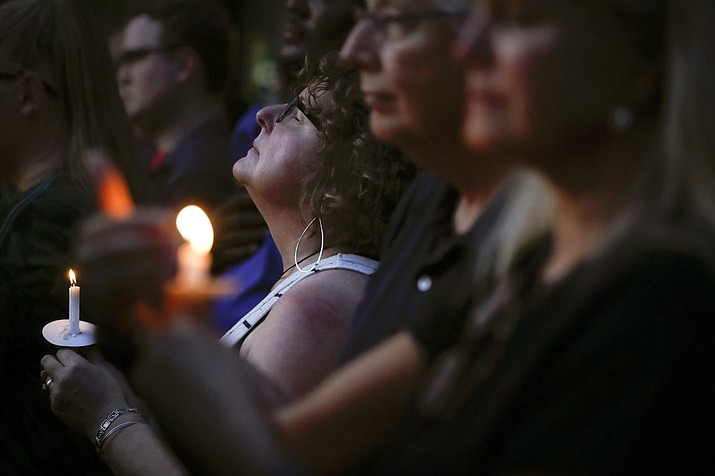 Mourners pause for a prayer as they gather for a vigil at the scene of a mass shooting, Sunday, Aug. 4, 2019, in Dayton, Ohio. In Prescott, the non-partisan community group Prescott Indivisible and Prescott Peacebuilders will host a Candlelight Vigil for the Dayton and El Paso massacre victims from 7 to 8 p.m. Monday, Aug. 12, at the courthouse plaza in downtown Prescott. (AP Photo/John Minchillo)

Mourners gathered across the country Saturday to remember the lives of victims of gunfire this past week. Funerals held were among several for people who died in mass shootings last weekend in Dayton, Ohio and El Paso, Texas.

Investigators in Texas said a gunman opened fire at a Walmart on Aug. 3, targeting Mexicans and killing 22 people. Less than 24 hours later, another shooter killed nine people in a popular Dayton nightlife area.

In Prescott, the non-partisan community group Prescott Indivisible and Prescott Peacebuilders will host a Candlelight Vigil for the massacre victims in El Paso and Dayton from 7 to 8 p.m. Monday, Aug. 12, at the courthouse plaza in downtown Prescott.

Participants can bring a light (battery votives or cellphone lights) and may want to bring an umbrella in case of inclement weather. The vigil will be held rain or shine.

The vigil is to “collectively mourn the tragedy of all of those directly and indirectly impacted by the recent shootings.”