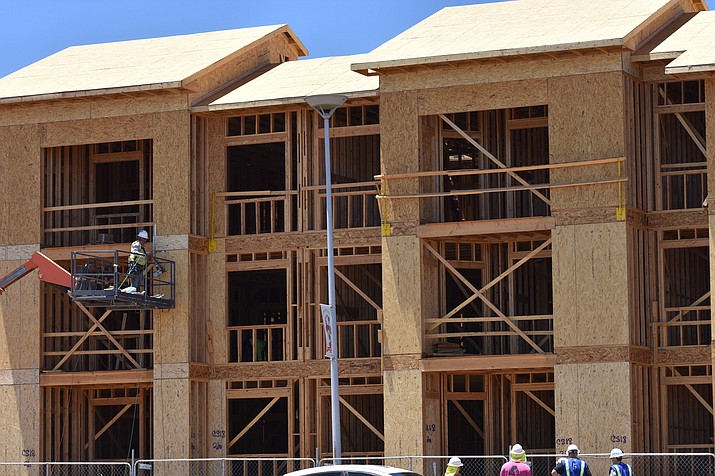 Arizona’s supply of rental housing currently meets only one-fourth of the state’s need, a National Low Income Housing Coalition report stated. That means the state has only 25 affordable and available rental units for every 100 extremely low-income rental households. That is down from 26 units in 2018. The number nationwide is 37 units for 2019. (Courier file photo)

Keeping housing affordable is a challenge for the entire Quad Cities, and it would go a long way in helping people stay here.

That, however, is not always the case, as attendees of a panel discussion on “Viable Housing” at Yavapai College on Thursday, Aug. 8, found out.

“Think of it as ‘attainable housing’ rather than ‘affordable housing,’” said Greg Vogal of Arizona Land Advisors who was one of the panelists. “We need greater economic opportunity here.”

Setting a baseline, let’s define this. Families who pay more than 30 percent of their income for housing are considered cost burdened and may have difficulty affording necessities such as food, clothing, transportation and medical care, according to the U.S. Department of Housing and Urban Development. They are at greatest need for affordable housing.

For low-income earners, two types of housing are considered government subsidized and low-income housing. Section 8 housing gives low-income families a voucher that makes up the difference in what they can afford and the actual cost of the apartments for rent that are available to them, the HUD stated in a 2017 report.

But just how bad is it? Aside from seeing our children leave the area for “greener pastures,” with affordability as one reason, Arizona ranks third in a 2019 National Low Income Housing Coalition study among the nation’s worst states for poor renters.

Others are also located in the West, according to the report, with Nevada having the greatest shortage of affordable housing; California is second.

Further, Arizona’s supply of rental housing currently meets only one-fourth of the state’s need, the National Low Income Housing Coalition report stated. That means the state has only 25 affordable and available rental units for every 100 extremely low-income rental households. That is down from 26 units in 2018. The number nationwide is 37 units for 2019.

That would be why we are seeing so many apartment complexes under construction. Admittedly, however, some of them are far from affordable for lower-income residents.

The conclusion from Thursday’s panel? Sustainable development can’t occur here unless local businesses, the public sector, schools and nonprofits pool their resources to help those who can’t afford housing.

We agree. With Prescott-area home prices recovering from the Great Recession, some people — young and old, workers and retirees — are struggling to even stay here. Consider that if one segment of the community must leave, those who remain will suffer. Balance is needed.

We see a good portion of the solution as needing to expand the local job-base beyond service and tourism.

For example, the Yavapai County Contractors Association created a job force boot camp in 2018 to help younger people interested in trades. “After three weeks, 18 of the 30 [people in the boot camp] went to work in the construction industry,” YCCA’s Sandy Griffis said. “They’re still working today. Two were making $28 an hour and were grateful and pleased they could rent their first apartment.”

With the average household income locally being roughly $48,000 per year, which is about $7,000 lower than the national average and the third lowest in Arizona, keeping housing affordable is not a challenge for only the landowner or the landlord, the renter or the retiree.

It is something that all of us must be concerned about because it touches every housing type and every person — no matter their economic stage in life.