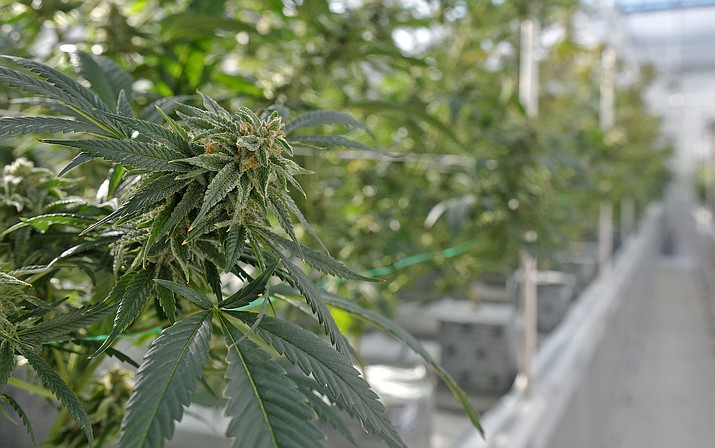 A detail of a marijuana plant at the Sun King Labs marijuana grow house in Chino Valley. (Courier file)

PHOENIX — Backers of legal recreational marijuana took the first steps Friday to putting the issue on the 2020 ballot.

The initiative, crafted by supporters and financed by the current and would-be seller, would allow anyone 21 and older to buy and possess as much as an ounce of marijuana or up to 12 plants for a household. It also would provide an opportunity for anyone already previously found guilty of having that much of the drug to have the conviction expunged from their record.

As an incentive to get people to sign the petition — and approve it if it makes the ballot — the measure would impose a 16% tax on sales. Proponents say that would generate $300 million a year in new revenues for community colleges, public safety, health programs and for construction and repair of roads.

Backers also built in provisions designed to blunt criticism, particularly from the business community that helped quash a 2016 measure. That specifically includes allowing companies to prohibit the use and possession of the drugs on the job, even to the point of being able to maintain policies that allow them to fire people if they show any signs of impairment.

And aside from a prohibition on sales to anyone younger than 21, it bars the sale of marijuana products that resemble fruits, toys, cartoons or even animals — think gummy bears — or “resemble or imitate food or drink brands marketed to children.’’

There also is a ban on smoking in public designed to mirror what already exists in law to restrict where people can light up cigarettes, pipes and cigars.

Backers filed the initiative language Friday, Aug. 9, with the Legislative Council, the legal arm of the legislature, which can suggest changes. Stacy Pearson, spokeswoman for the campaign dubbed the “Smart & Safe Arizona Initiative,’’ said supporters will consider any changes and start gathering signatures next month.

Pearson said organizers already have promises of financial backing of both existing marijuana dispensaries and some out-of-state operations to be able to not only hire paid circulators but run the campaign. As of the last financial disclosure report in July, the campaign already had $724,000 in donations.

There will be opposition.

“Legalizing marijuana is neither smart nor safe,’’ said Yavapai County Attorney Sheila Polk, who also chairs Arizonans for Responsible Drug Policy. In a prepared statement, she said the corporations pushing the initiative are putting their profits ahead of public good.

The organization also released a statement from Dr. Dale Guthrie, a former president of the Arizona Chamber of the American Academy of Pediatrics who practices in Mesa, saying that science does not support contentions that marijuana is safe.

Garrick Taylor, spokesman for the Arizona Chamber of Commerce, which led opposition to the 2016 measure, said his organization will review the new language “with a fresh eye.’’ But Taylor suggested there is little chance that it will be found acceptable to the business community.

Pearson, however, said polling suggests that Arizonans, like counterparts in other states, are ready to legalize marijuana for adult use. In fact the 2016 measure, which even some supporters of legalized marijuana found flawed, failed by only about 4 percentage points.

The initiative has other provisions designed to address some concerns. But one may have a large loophole: the issue of driving under the influence.

The measure says that, legalization or not, people are not permitted to drive, fly or operate a boat “while impaired to even the slightest degree by marijuana.’’

But the open question here, however, is what that means. The Arizona Supreme Court has ruled that the mere presence of metabolites — the compounds caused by the breakdown of marijuana in the body — is insufficient by itself to prove impairment. That’s because those chemicals can remain in the body for days or weeks afterward.

That, then, leaves only the question of how much tetrahydrocannbinol,, the psychoactive ingredient in marijuana, someone has in the blood.

Only thing is, Arizona has no such standard.

The initiative does allow the legislature to set a standard, but only “when scientific research on the subject is conclusive and the National Highway Traffic Safety Administration recommends the adoption of such a law.’’

In the meantime, attorney Roopali Desai acknowledged that even if police do find THC in a motorist’s blood, that, by itself, cannot lead to a charge of driving under the influence.

Desai said, however, that does not preclude someone from being arrested. She said it still permits someone with THC to be charged if there is other evidence of impairment, such as swerving between lanes, driving too slow or braking too fast.

The money expected to be raised from the 16% tax could prove to be a double-edged sword, with some states reporting that the illegal sales continue as buyers seek to avoid the additional levies. And that figure does not count the sales taxes that the state and cities are permitted to charge, potentially adding 25% to the retail price.

Pearson dismissed the question of whether those additional costs will mean continued illegal sales.

“We worked with an economist to set this rate at the point where the maximum amount of revenue is delivered to the state without impacting sales to the black market,’’ she said. Anyway, Pearson said, other states have higher levies.

The Tax Foundation shows Colorado with a 15% excise tax plus a 15% sales tax. But in Nevada the two taxes add up to 25%, with California imposing a 15% basic sales tax plus $9.25 an ounce on the sale of flowers.

Another provision specifically allows any city or county to limit the number of dispensaries that can sell recreational marijuana.

Pearson conceded that, at least theoretically, that could effectively nullify the measure if councils in all 91 incorporated cities and supervisors in the 15 counties opted out.

That’s what happened in California where only about one out of every three communities allows marijuana sales. Pearson she dismissed the possibility.

“That’s just not going to happen,’’ she said.

Anyway, Pearson said, sales initially will be restricted to the existing medical marijuana dispensaries that already are limited in number, one for every 10 pharmacies in the state.

“The public doesn’t want to see the footprint doubled,’’ she said, with more places where marijuana is available popping up. It also allows for zoning restrictions, something that currently keeps medical dispensaries out of residential neighborhoods or schools.

Pearson defended the fact that the existing dispensaries, many of whom are expected to finance the initiative, will get first crack at the licenses for recreational sales. She said that not only ensures there will be operations in place if and when voters approve the ballot measure but that these facilities already are regulated by the state Department of Health Services.

In a bid to deal with the question of overdoses, the initiative specifically limits edibles to no more than 10 milligrams of THC per dose. That is fairly consistent with what is available in similar products in other states.

But there are no limits on the amount of THC for those buying actual leaves and flowers. Pearson said even plants that have been specially bred can produce only so much of the chemical.

There is, however, a provision for the testing of the marijuana so buyers know the THC content, language that dovetails on a similar testing law approved earlier this year by the Legislature for medical marijuana.