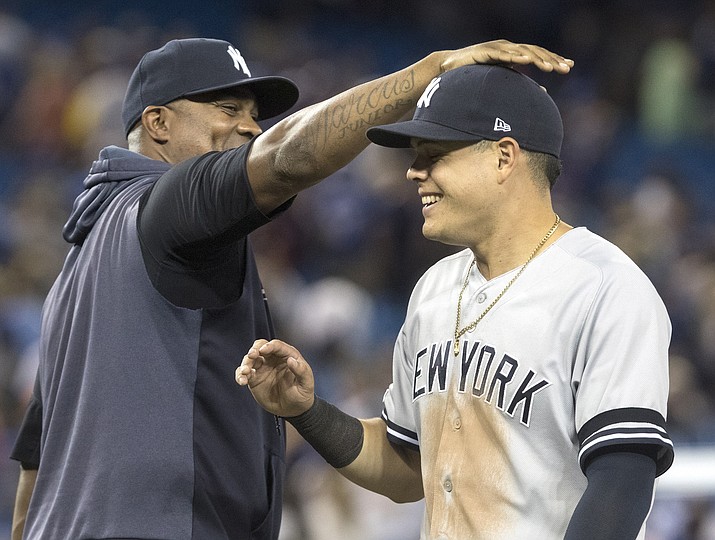 Playing in Toronto for the first time, Bichette became the first player in major league history to double in nine consecutive games. He also homered, giving him an unprecedented 13 extra-base hits in his first 11 career games. Bichette is the first rookie to have an extra-base hit in nine straight games since Ted Williams in 1939, according to STATS.

The Yankees have hit a record 19 homers over their last four games, including at least five in each win during a three-game sweep at Baltimore this week. Mike Tauchman also homered Thursday to give New York three connections.

Both of Urshela’s homers came off left-hander Thomas Pannone (2-5), who matched a career worst by giving up seven runs in 2 1/3 innings.

Luis Cessa pitched the final three innings for his first save.

Sale (6-11) had allowed 14 runs over nine innings during his previous two starts, both against the rival New York Yankees. He carved up the Angels in his 13th outing with double-digit strikeouts this season.

The Red Sox had lost nine of 10 games, not including’s Wednesday’s contest against the Royals that was suspended in the 10th inning with the score tied at 4. Thursday’s game ran without issue and was over in a tidy 2 hours, 16 minutes. Brandon Workman worked a clean ninth with two strikeouts for his seventh save.

Dillon Peters (2-1) gave up three runs and five hits and struck out eight over six innings.

MINNEAPOLIS (AP) — Jose Ramirez drove in three runs, Mike Clevinger kept Minnesota quiet with nine strikeouts in seven innings, and Cleveland struck first in this four-game series between the AL Central front-runners to pull within a game of the Twins.

Indians closer Brad Hand ended the game by retiring Eddie Rosario on a routine flyout with the bases loaded, recording his 29th save in dramatic fashion.

RBI singles in the fourth by Luis Arraez and Marwin Gonzalez accounted for two of the three hits managed by the Twins against Clevinger (7-2), who watched four relievers toil through a three-run eighth inning that cut Cleveland’s lead to 6-5.

The Twins lost leading home run hitter Nelson Cruz to a strained left wrist, after he swung and missed at a pitch from Clevinger in the fourth. Kyle Gibson (11-5) got them off to an ominous start, giving up six runs in less than five innings behind a career-high six walks.

CINCINNATI (AP) — Anthony Rizzo had a pair of hits as part of a 30th birthday celebration, Nicholas Castellanos added to his Chicago surge with a pair of homers and the Cubs beat Cincinnati for their biggest NL Central lead of the season.

The Cubs’ sixth win in seven games gave them a 3½-game margin over the idle Brewers. Left-hander Cole Hamels struggled, but Tyler Chatwood (5-1) fanned six in three innings as Chicago pulled away.

Castellanos had a pair of solo homers among his three hits, the latter breaking a 5-5 tie off Kevin Gausman (3-8) in the fourth inning. He’s hit safely in all eight games since the Cubs got him from Detroit.

Aristides Aquino hit a two-run homer for Cincinnati measured at 118.3 mph, tying the Yankees’ Gary Sanchez and Mets’ Pete Alonso for the hardest-hit homers this season.

The Marlins chased Keuchel (3-5) with a five-run fourth capped by Anderson’s second home run and 20th of the season for an 8-0 lead. Keuchel allowed eight runs and 10 hits in 3 2/3 innings, his shortest outing since joining the Braves on June 10.

Travis Demeritte led off the ninth with his third walk of the game and moved to second on a sacrifice bunt by Jake Rogers. Mercer then hit a 2-1 fastball into the right field stands.

Joe Jimenez (3-6) got the win with a scoreless ninth inning.