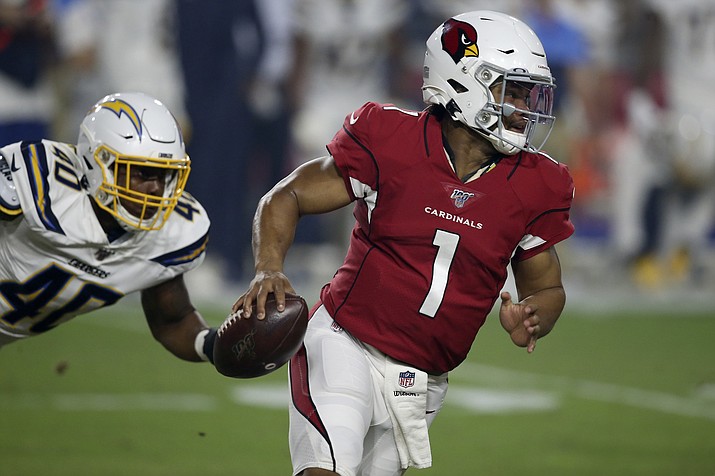 However, he completed nearly all of his passes and showed the mobility that made him the top overall draft pick.

The Arizona Cardinals rookie quarterback went 6 for 7 for 44 yards in the 10 plays of the Cardinals’ first offensive series of the game.

Then he put on a headset, took off his pads and watched the Cardinals’ 17-13 win over the Los Angeles Chargers in the preseason opener for both teams Thursday night.

“I thought it was smooth. I was anxious to get out there, move around and throw it a little bit,” Murray said. “I really just tried to execute whatever Coach called, and I think we did that for the most part.”

The 2018 Heisman Trophy winner, starting his first NFL drive at the Cardinals 2 after a fumble recovery, picked up three first downs, with his longest completion a 14-yard short pass to running back David Johnson.

Murray didn’t have an official carry, but worked out of the shotgun and rolled out several times.

He escaped pressure from the Chargers’ Chris Peace on one play and completed a pass along the sideline to rookie KeeSean Johnson, but it was ruled incomplete because of a penalty.

“When we got the strip I was like “Good,’” Murray said. “At the same time I was like ‘Of course I get the ball at the 2. We brought it out, and unfortunately didn’t finish the job.”

The Cardinals did, however. Trent Sherfield, who had 19 catches a season ago after making the team as an undrafted free agent, hauled in a 22-yard touchdown pass from backup quarterback Brett Hundley 35 seconds before halftime to tie the score at 7.

Zane Gonzalez hit a 55-yard field goal and Wes Hills ran 7 yards for a touchdown in the second half, and the Cardinals held on in new head coach Kliff Kingsbury’s NFL debut. Easton Stick, the third quarterback for the Chargers, scored on a 31-yard scamper in the fourth quarter.

The Chargers, with starting quarterback Philip Rivers held out, scored first with 13:42 left in the second quarter and both team’s regular starters already done for the evening. Justin Jackson ran 4 yards for a touchdown.

Tyrod Taylor started in place of Rivers and was 6 of 6 for 72 yards.

Chargers running back Austin Ekeler got the start with star Melvin Gordon holding out in a contract dispute, and rushed for 40 yards on five carries. He also fumbled near the goal line in the first quarter.

Cardinals cornerback Patrick Peterson started and was in for the first defensive series. He’s suspended for the first six games of the season for violating the NFL’s policy on performance-enhancers.

Second-year pro Mason Cole started at left guard in place of the injured Justin Pugh, then moved to center for the second offensive series with starter A.Q. Shipley playing one series.

Chargers: TE Andrew Vollert was helped off in the third quarter with a knee injury after a punt and didn’t return.

Cardinals: Rookie cornerback Byron Murphy, a second-round draft pick, did not play and had his leg in a boot.

Cardinals: vs. Oakland next Thursday night.