9th Circuit to review McSally’s appointment to US Senate 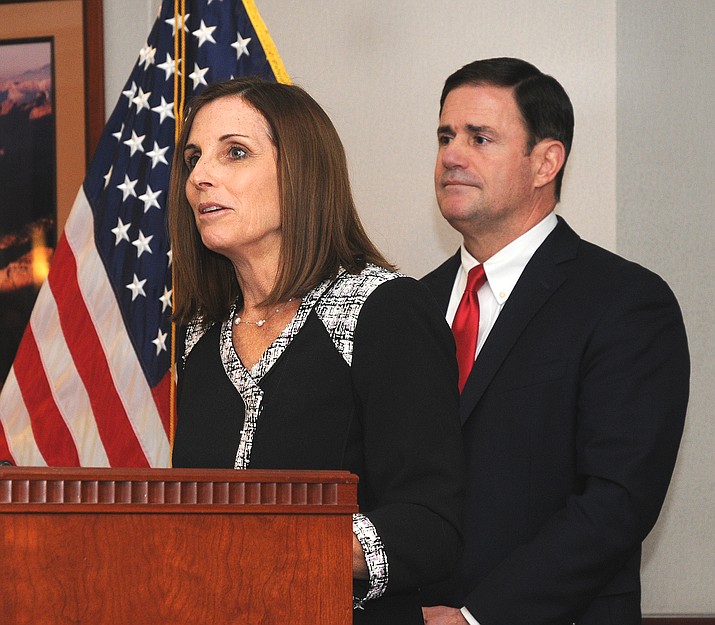 Martha McSally in late 2018 when she was tapped by Gov. Doug Ducey to take the U.S. Senate seat occupied by John McCain until his death earlier that year. (Howard Fischer/Capitol Media Services)

PHOENIX — Federal appellate judges have agreed to decide whether Martha McSally can continue to serve as a U.S. senator at least through the 2020 election.

And they have agreed to rush the case — at least by judicial standards.

In a brief order, the judges of the 9th U.S. Circuit Court of Appeals rejected arguments by McSally and Gov. Doug Ducey, who appointed her, that there is no need to expedite the issue.

“Regardless of how this court ultimately decides this appeal, Arizona voters will have the opportunity to select the person to complete Sen. John McCain’s term in 2020,’’ wrote Brett Johnson, one of the attorneys representing the governor. And he argued that there would not be a need for an expedited hearing had the challengers to the appointment moved a bit faster when the case was heard in federal district court in Phoenix.

James Tyrell III, McSally’s attorney, echoed those arguments in what amounts to a “me, too’’ filing with the court.

But that didn’t convince the appellate judges who agreed to move more quickly than normal and set a hearing for November.

That still leaves the question of whether there can be a final resolution — and an order for a special election if it comes to that — before the already scheduled August 2020 primary where McSally could face Republican foes in her bid to fill out the last two years of McCain’s six-year term and, if she survives that, the November general election where Democrat Mark Kelly hopes to unseat her. That’s because whoever loses this round is likely to seek U.S. Supreme Court review which could delay a final ruling.

“All we can do is try,’’ said attorney Michael Kielsky who is representing the challengers. And he conceded that a final determination could come too late to force the special election being sought.

But Kielsky said that, if nothing else, it would set the precedent for what happens in future Senate vacancies and how long an unelected choice by the governor can serve.

Central to that is the 17th Amendment to the U.S. Constitution. It took the power to name U.S. senators away from state lawmakers and gave it directly to voters.

It also says that when there are vacancies, the governor “shall issue writs of election to fill such vacancies.’’ Ducey has done that, setting the primary for Aug. 25, 2020 and the general election for the following Nov. 3 to determine who gets to serve through 2022.

The lawsuit, however, contends the Constitution requires the appointment to be temporary “until the people fill the vacancies by election as the Legislature may direct.’’

Ducey initially named former Sen. Jon Kyl to the seat until he quit this past January, at which point the governor selected McSally who had just been defeated in her own Senate race by Democrat Kyrsten Sinema.

But challengers are arguing that 27 months between McCain’s death and the November 2020 election hardly counts as a “temporary’’ appointment. He wants a special election ahead of that to give voters the chance to put someone other than the unelected McSally in office to represent them as soon as possible.

Challengers have to seek 9th Circuit intervention because U.S. District Judge Diane Humetewa rejected his arguments that the Constitution requires there be a special election within a year — if not less — when there is a vacancy in a senate seat.

In her June ruling, Humetewa acknowledged that Ducey is allowed to fill a Senate seat on a “temporary’’ basis.

But the judge said she finds nothing in the law that says 27 months is too long for a temporary appointment. And Humetewa rejected the argument that allowing McSally to serve until the 2020 election infringes on that 17th Amendment right of voters to choose their own senators.