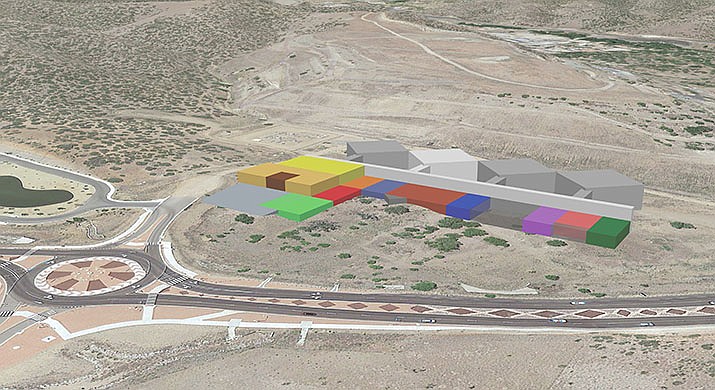 Yavapai County Board of Supervisors approved a new Criminal Justice Center for the Quad Cities – Option 1 of three – after hearing from Facilities and Parks Director Kenny Van Keuren at the Wednesday, Aug. 7, board meeting in Prescott. (City of Prescott/Courtesy)

Yavapai County Board of Supervisors approved a new Criminal Justice Center for the Quad Cities – Option 1 of three – after hearing from Facilities and Parks Director Kenny Van Keuren at the Wednesday, Aug. 7, board meeting in Prescott.

Van Keuren presented three proposals, recommending Option 1 to the board: a 93,868-square-foot facility with 144 beds and two courtrooms, plus medical, food service administration and laundry. A co-located non-custodial mental health facility will be part of the facility that will total about $68 million to build.

The mental health facility is part of all three options, and its programs will include intercepting and providing treatment care rather than booking individuals with mental health issues into an in-custody environment.

“Option 1 is within the project budget, meets the needs of the stakeholders and, as a new facility design, will include the most up-to-date building systems and provide for efficiency in life cycle cost and staffing,” Ronald Ecker, senior project manager for Kitchell, the company that reviewed and produced cost estimations, stated in a letter dated Aug. 5.

The county contracted with Kitchell in December this past year to provide owners representative services.

The $97,000 contract paid for review of geotechnical and environmental reports; confirm agreement on decisions about transportation, bookings, demographic projections, healthcare needs and adjudication; meeting with stakeholders to review requirements; and providing an assessment of the concept program and master plan.

Chinn Planning, Inc. produced a jail assessment study in 2016 indicating renovations on the Gurley Street facility (former jail) and expansion and repairs to the Camp Verde jail facility were not practicable. The study recommended construction of a new facility on county property located on Prescott Lakes Parkway to the west of the Yavapai County Juvenile Detention Center.

At Wednesday’s meeting, Yavapai County Sheriff Scott Mascher said the Chinn report reinforced what he has been telling the board for 10 years. A Prescott-based facility will reduce the cost of “care, custody and confinement” in addition to the three million miles a year to transport inmates between the Camp Verde Jail and court in Prescott.

Van Keuren said the second option, at $80 million, is to repurpose the existing Juvenile Justice Center to meet adults’ needs and build a new center for juveniles. The third option, $91 million at full buildout, would add three more pods of 144 beds each and expansion for additional services.

“We have seven communities with three more to come in the next years. We worry about safety and property values,” Storms said. “Who would buy a home near a jail?”

The supervisors unanimously approved Option 1 and Van Keuren said he would proceed to advertise for Requests for Qualifications for architectural and construction-manager-at-risk services.

Consultant to Board of Supervisors: New $40 million jail needed in Prescott
County supervisors to see plans for Criminal Justice Facility
Supes vote to move ahead on jail needs assessment
Yavapai County board to discuss construction costs for new jail
County hopes to break ground on Justice Center in September 2020