Days Past: Willard J. Page: Artist on the Southwest Road 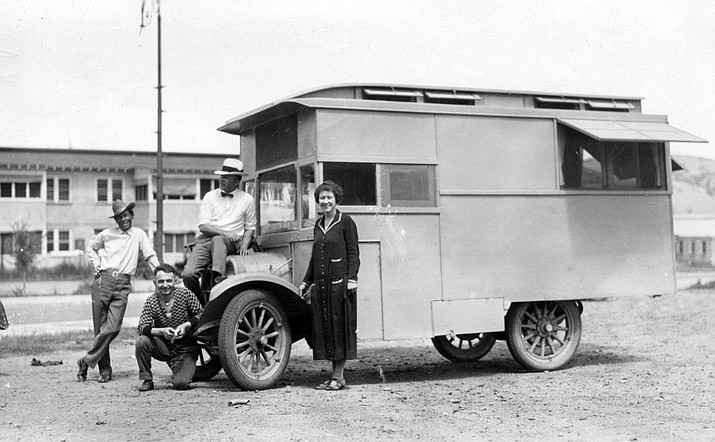 Willard, Ethel and friends in front of their caravan. (Courtesy of the author and exhibit creator.)

Born in 1885, Willard J. Page grew up on a small farm in Whiting, Kansas. He had a talent for art, and was awarded a scholarship to study painting at the University of Kansas. After school, Page found work as a performing artist, traveling with the Redpath-Horner Lyceum and Chautauqua. At this time in America, the Chautauqua circuit brought culture and entertainment to thousands of people in small towns who may not normally have had access to nationally known speakers, lectures, musicians, showmen, artists and preachers.

Although providing quality entertainment for the public-at-large, the schedule could be grueling for performers. As the company traveled to rural communities throughout the Midwest, Willard drew and lectured in nightly performances. In 1917, he married Ethel Iles from Everest, Kansas. Ethel was an accomplished pianist, and she joined Willard with the Chautauqua series where she played the piano and sang ballads. 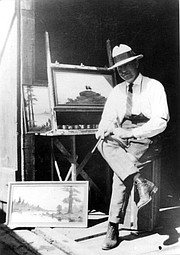 Willard Page at his easel. (Courtesy of the author and exhibit creator.)

Page was a quick-draw or crayon artist and gave “chalk talks.” Because he sketched and painted so quickly as he spoke on stage, he was also called a “Lightning Artist.” His part of the program, drawing as he lectured, was highly popular. Local newspapers reported that he was a “REAL artist,” that he was an “entertainer of exceptional ability,” and that, “his landscape work was wonderfully well done.”

When the popularity of the Chautauqua faded in the early 20th century, the Pages moved to Boulder, Colorado, where Willard painted small landscapes for the tourist market. He built a wide easel where he could paint in an assembly-line style. The finely detailed miniature landscapes had blue skies with a dab of white for clouds, purple mountains and golden aspens shimmering in the foreground. This technique allowed him to quickly produce postcard-sized paintings, convenient souvenirs for tourists to carry back home.

By the early 1920s, as Ethel’s arthritis worsened, the Pages made the decision to leave Colorado during the harsh winters and follow the sun to the warmer Southwest. Willard built a camper shell on a Dodge chassis, and the couple left Colorado every fall in their homemade RV, touring New Mexico, Arizona and California. Willard painted as they traveled, selling his “suitcase souvenirs” to gift shops and art galleries. Most stores bought his paintings in batches. A 3 1/2” x 3 1/2” painting, his most common size, sold for sixty cents, a 5” x 7” was ninety cents. Larger paintings were priced a few dollars higher, but seldom over 10 dollars. On their annual travels through Arizona, Willard painted saguaros and ocotillos, the Superstitions, the Grand Canyon and Prescott’s Thumb Butte.

In 1929, Willard and Ethel purchased land on a hillside overlooking Boulder, where they built a two-story house of local stone. An upstairs bedroom became Willard’s studio, and Ethel’s grand piano was prominently placed in the living room. Because arthritis prevented Ethel from climbing the stairs, Willard cut a one-foot-square hole in the upstairs hallway, enabling them to converse during the daytime when Willard was painting. A portion of their large garage was used for his woodworking projects, where he cut and constructed all the frames used on his paintings.

Willard passed away in 1958. Over the course of his lifetime, he painted hundreds, if not thousands, of small paintings of adobe villages and desert landscapes, as well as the aspens and mountains of the high country. In addition to his scenic miniatures, he also created exquisite larger paintings. Today, these delightful landscapes and small “suitcase souvenirs” are much sought after and prized by collectors. Willard Page’s prolific career produced lasting memories of travels in the American West.

“Days Past” is a collaborative project of the Sharlot Hall Museum and the Prescott Corral of Westerners International (www.prescottcorral.org). This and other Days Past articles are also available at https://archives.sharlot.org/articles/days-past-articles/1 The public is encouraged to submit proposed articles and inquiries to dayspast@sharlohallmuseumt.org. Please contact SHM Library & Archives reference desk at 928-445-3122 Ext. 2, or via email at archivesrequest@sharlothallmuseum.org for information or assistance with photo requests.