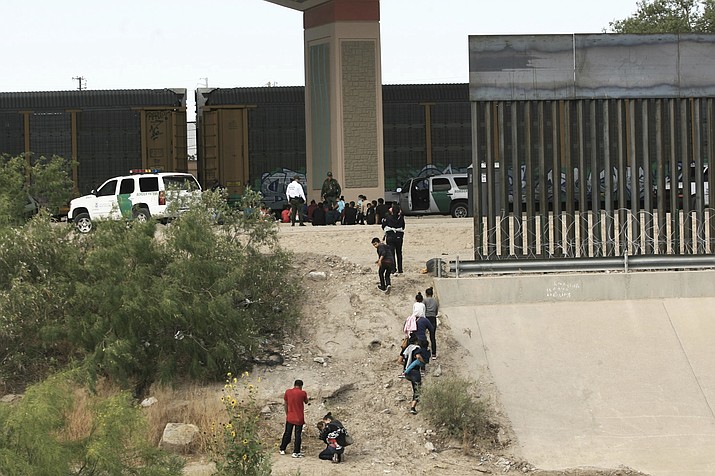 In this June 15, 2019, file photo, migrants cross the Rio Bravo illegally to surrender to the American authorities on the US - Mexico border between Ciudad Juarez and El Paso. El Paso has swiftly become one of the busiest corridors for illegal border crossings in the U.S. after years as one of the sleepiest. (Christian Torres/AP, file)

EL PASO, Texas — Deny Martinez paid a smuggler $7,000 to take him and his teenage son from Honduras to the Mexican side of the Rio Grande, across from El Paso, Texas.

His smuggler's destination was Ciudad Juarez, Mexico: a dry river basin in view of El Paso's downtown office towers. The channel crosses the city and, at one point, is less than 3 miles (5 kilometers) from the Walmart where a gunman attacked shoppers on Saturday, resulting in 22 deaths.

An unprecedented wave of Central American families has reached the U.S. border this year — most strikingly in El Paso, where the suspected assailant was linked to an online screed against a "Hispanic invasion" and Latino asylum seekers.

It is unknown why the gunman traveled from his hometown near Dallas to El Paso, but the border city of 700,000 people has become a hotbed for immigrant crossings after years of being one of the sleepiest locations on the border. With smugglers often dictating the route, Central Americans find they can easily cross the dried-up Rio Grande in El Paso with young children. Then they wait for Border Patrol agents to arrest them and to be released to a robust network of private shelters in the city.

Martinez, 34, was freed with his 14-year-old son after four days in U.S. custody and given a notice to appear in immigration court. He came for economic reasons and had no plans to seek asylum.

"I feel very happy to be in the country," he said on a Sunday night in April before boarding a Dallas-bound bus. "Let's see how much time they give me here."

Agents in the Border Patrol's El Paso sector made as many arrests during the entire 2012 fiscal year as they averaged in a single week in May. The sector saw a more than sevenfold increase in apprehensions from October through June, compared with the same period a year earlier.

The Border Patrol released a grainy surveillance video of more than 1,000 people crossing the border illegally in El Paso on May 29, the largest group the agency ever encountered. Armed militia members started flocking to the desert on the outskirts of El Paso this past spring, including one group that detained 300 migrants. The group posted a Facebook Live video of the encounter in which militia members repeatedly described it as an "invasion."

President Donald Trump planned to visit the city Wednesday amid backlash from some El Paso residents who believe his hardline immigration rhetoric has helped fuel the online vitriol associated with the Walmart gunman. Trump held a rally here in February and invoked El Paso during his State of the Union speech in making the case for his border wall, drawing criticism because he overstated the city's crime rate.

With a population that is 80% Latino, El Paso is one of the most heavily Hispanic big cities in America and one of the safest. It holds deep significance for many Mexican-Americans.

The desert oasis' economy depends on Mexican factories and shoppers who frequently cross the border to shop in El Paso, and many residents have close ties to neighboring Ciudad Juarez. Eight Mexican citizens were killed in Saturday's massacre.

El Paso's enduring connection to Mexico plays out in daily rituals of education, family, and commerce. After the bells ring in El Paso high schools, the international bridges become a sea of backpacks, with hundreds of American students going home to their families in Ciudad Juarez. Pesos and dollars are accepted on both sides of the border.

Thousands of residents have a border fence as their backyard. Mexican architecture shapes the city, from opulent mission-style haciendas in the hills to humble adobe houses.

Customs and Border Protection and Immigration and Customs Enforcement officers have long been part of the community, and many of them responded to the shooting Saturday.

"Our diversity is what makes us special," Mayor Dee Margo said Monday.

El Paso only recently became a way station for thousands of migrants fleeing poverty and murders in Guatemala and Honduras, many of them families. People who came in families or as unaccompanied children accounted for 85% of El Paso sector arrests from October to June, compared with 66% for the entire Mexican border.

The swiftness of the shift to El Paso surprised many agents.

"It's like flipping a switch," said Aaron Hull, who was chief of the Border Patrol's El Paso sector during the surge earlier this year.

Annunciation House, a nonprofit group that has aided migrants for 40 years in El Paso, arranged beds, meals and transportation assistance for thousands of people at a time earlier this year, finding space in churches, motels and other shelters. U.S. authorities say the group's work may help explain the city's draw for asylum seekers.

"Migrant families have learned, 'Come to El Paso. Come to Juarez. You're going to be there a couple days. You'll get processed and released. You will go to Annunciation House, and they'll take care of you from there,'" said Corey Price, Immigration and Customs Enforcement's field office director for enforcement and removal operations in El Paso, who considers the group a partner and praises its work. He spoke just before the Trump administration began making many Central Americans wait in Ciudad Juarez for their hearings in U.S. immigration court.

On one Thursday morning, a group of 23 Central Americans, about half of them children, walked unimpeded across the dry riverbed that separates Mexico from the U.S., blocked from going farther into the U.S. by tall steel bollards that the Trump administration installed to replace less formidable barriers. They walked along a dirt road and waited for agents to spot them.

Juan Gaspar Casinto, who worked as a private security guard in Guatemala, hovered over his 6-year-old daughter as she slept on the floor of a Greyhound station, packed with other migrants on a Saturday night.

Casinto, 31, said coming to the U.S. alone wasn't an option. Children must be released within 20 days under a court order, a fact that became more widely known after the Trump administration was ordered by a judge to stop its general practice of separating families.