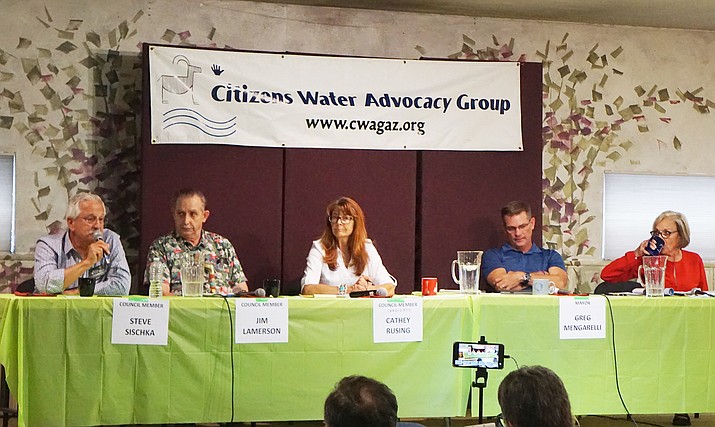 The region’s groundwater overdraft is not the sole responsibility of the City of Prescott, City Council candidates stressed during a recent public forum.

Still, several also maintained that Prescott has long taken the lead on water matters, and they appeared ready to continue that leadership role.

About 125 people were in the audience to hear CWAG President Gary Beverly ask a series of water-related questions, which Beverly acknowledged had no easy answers.

First off was a question about safe yield – the condition of balance between the amount of water being pumped from the ground and the amount being recharged back in.

Prescott has been deemed out of safe yield for years, and CWAG’s question pressed the candidates on what the Active Management Area (AMA) should do about it.

The question noted that neither of the water studies that the city recently paid consultants to conduct “has mentioned the management goal of the AMA: safe yield by 2025.”

Showing statistics on the annual and cumulative water “overdraft,” as well as the progressive decline in the level of a well in Chino Valley, Beverly asked the candidates to comment on the city’s responsibility for achieving safe yield in the Prescott AMA.

Incumbent Councilman Steve Sischka led off by emphasizing a point that city officials have made repeatedly in recent months: That Prescott’s population growth has long been moderate at about 2% a year, while the neighboring communities of Prescott Valley and Chino Valley have grown much more dramatically.

And even as the city has grown, Sischka said, Prescott’s water use had decreased by 2% per year. “Prescott can’t drag the AMA into safe yield,” he said.

Incumbent Councilwoman and Mayor Pro Tem Billie Orr emphasized that area governments need to work together. “My message is one of collaboration,” she said, adding, “Who’s not at the table right now, but we really need at the table, is the county.”

Council candidate Cathey Rusing, the only non-incumbent running this year, quoted the city’s general plan in noting that “there is not a plan to achieve safe yield.”

Rusing maintained that the city’s first step should be “to admit we do have a problem.” Then, she said, Prescott should join with the other entities of the Central Highlands to work on the issue.

“The aquifer does not stop at our wells in Chino Valley,” she said. “We are groundwater mining, and we are not in safe yield.”

Incumbent Councilman Jim Lamerson stressed the role of the state as well.

“We are doing what we jurisdictionally can do,” he said of the city. “I think the big elephant in the room … is the state of Arizona. The state has been less than diligent.”

Mayor Greg Mengarelli, who is running unopposed for a second two-year term, agreed with Beverly that “there is an issue with the water table decreasing year after year.” But, he said the level of the decrease is not as consistent and broad-based as implied.

“I would try to use a broad spectrum,” he said of the statistics used in the question.

To encourage more regional work on safe yield, Mengarelli pledged to the audience that he would work on inviting all of the mayors of Yavapai County to a water summit by the end of the year.

“Prescott is used to leading,” Mengarelli said. “I’m happy to reach out to the other cities and towns to work toward safe yield.”

CWAG’s questions also focused on another perennial city-election issue: When, if ever, should water be imported from the city’s Paulden-area Big Chino Water Ranch land in the Big Chino Basin?

Specifically, the question asked how the candidates would deal with the differing water needs of Prescott and its water-ranch partner Prescott Valley.

The question noted that while Prescott officials have implied that the city might not need to import water for several decades, “Prescott Valley is expressing more immediate demands for the pipeline.”

Sischka said recent studies have shown that Prescott may someday “build out” to about 85,000 population – growth that he said could be handled without importing water.

“I don’t see Prescott as ever using and ever needing the Big Chino,” Sischka said.

Lamerson stressed that the City of Prescott is the only city in the Prescott AMA that has the right to import water from the Big Chino Basin. “Prescott Valley is going to have to come to the table; we’re in control,” he said.

Mengarelli and Orr pointed out that because Prescott Valley has a greater need for Big Chino water, the City of Prescott could use that as a point of negotiation to encourage regional efforts toward safe yield, including more water-conservation measures.

Rusing said that because Prescott has a controlling interest (54% to Prescott Valley’s 46%) in the water ranch, she believed the city would have “the final say in what is done.” She added: “I just hope that we continue to conserve water, especially regionally, and maybe we will not need the pipeline.”

Ballots for the city’s primary were mailed out to registered voters last week, and are due back by 7 p.m. Aug. 27.