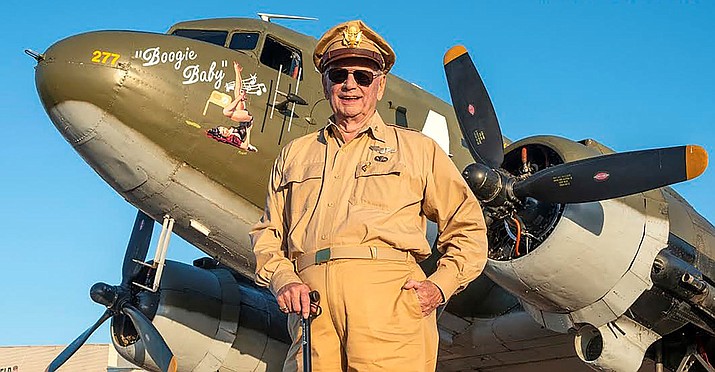 The gift to longtime Prescott-area resident Dave Hamilton on his 97th birthday was a doozy — a nifty nod to nostalgia. And it came to him on Saturday, July 20, in the flight of the C-47 “Boogie Baby” at Frederick Army Air Field, a WWII Army training field in southwest Oklahoma, thanks to the World War II Airborne Demonstration Team that is headquartered there.

Hamilton’s WWII role as a 21-year-old C-47 Pathfinder pilot was to ferry 18 paratroopers with the 82nd Airborne Division across the English Channel on the night of June 5-6, 1944, with their drop being in German-held territory near Sainte-Mère-Église in western France. He was one of 40 Pathfinder pilots participating in dropping Allied paratroopers on D-Day. And the retired lieutenant colonel also was treated to a C-47 flight over the channel this past June 6 during the commemorative activities marking D-Day’s 75th anniversary.

The flight in Oklahoma was especially fulfilling to Hamilton, in that as co-pilot he spent about 30 minutes of the hour-long journey in the right seat at the plane’s controls along with the pilot, Dave Brothers. Hence, he told me in an interview last week, the experience stood out as “the best birthday I ever had!”

More excitement is in store for Hamilton a couple of months from now, though, when he will be the special guest at the Wings Out West air show that will take place Saturday, Oct. 5, at Prescott’s airport. Jerry Kidrick, an assistant professor at Embry-Riddle Aeronautical University, is the director of the show, which ERAU and the City of Prescott are co-sponsoring. Warbirds galore will be featured in the 9 a.m. to 2 p.m. event including a B-17 Flying Fortress — named “Sentimental Journey”; the C-53 “D-Day Doll” that was among the planes crossing the English Channel on that fateful day 75 years ago, and again on June 5, 2019, as part of the 75th anniversary flight; a C-47 – “Old #30”; a B-25 — “Maid in the Shade”; a TBM Avenger torpedo bomber; and a British Spitfire, among many others.

And rides in many of the aircraft can be purchased and taken before and after the show. Many specialty events will take place, with admission and parking being free to the public. A special seating area will be reserved for World War II veterans attending the air show. Contact Jerry Kidrick at kidrick@erau.edu with names of WWII veterans who will be attending the event so escorts to the seating area can be arranged for them.

As an interesting aside, honored guest Dave Hamilton is a descendant of the first treasurer of the United States, Alexander Hamilton, who was his great-great-great grandfather. It was in 1804 that his granddad went up against Vice President Aaron Burr in a duel. Hamilton’s pistol shot broke a tree branch directly above Burr’s head, but Burr’s bullet mortally wounded Hamilton, who died the following day. Looking back, our Dave memorialized his long-ago granddad as “the last bad shot in the family,” but immortality was showered on the former founding father who was spotlighted in the 2015 Broadway blockbuster extravaganza titled “Hamilton: An American Musical.” And Burr? He just lapsed into footnotedness, if that’s a real word.

However, I have my own true happening from real life involving a reference to Dave’s notable relative.

As a pre-teen kid, I was in the habit of listening to a “man on the street” exercise on KFYO radio – the only station in Lubbock at the time as I recall – that aired during the noon hour on weekdays when a guy named Jim Black would stop people on the street downtown, ask trivia questions and give little prizes for the correct answers.

So one day, the question he asked of a woman was: “Who was the first treasurer of the United States?” Well, she didn’t have a clue, so Jim noted that he was running out of air time and gave her a hint, telling her that the subject’s first name was Alexander. Well, she hesitated for a few seconds before replying: “Alexander the Great?”

No prize for that lady that day. And I suppose her answer could’ve been worse, as she might have answered “Alexander Bumstead”, Dagwood and Blondie’s kid. One never knows.