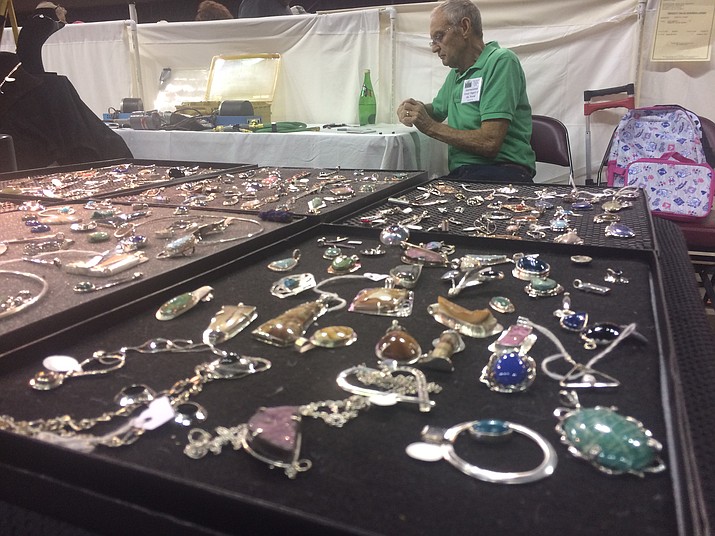 He paints with acrylics and then seals the piece with a polyurethane coat, but he didn’t always use rocks as his canvas, Znaniecki said. It all started when he left his job in the federal government, he said. He had worked in the Bureau of Land Management, the National Park Service and the military and was a computer expert, but wanted to get away from all of that. At first, Znaniecki he painted on actual canvas, but then the market for flatwork art on canvas fell apart thanks to the print art market coming into being, he said.

“I had to be different, and the only way to be different is to go onto something else,” Znaniecki said. “I have a master’s in geology and geography, and I’ve always been a rock hound.”

So he started painting on rocks. As far as what kind of scene he decides to paint, Znaniecki said the rock tells him. He can see the picture in the rock, he said.

The show, which continues Sunday, Aug. 4, has more than 60 vendors alongside Znaniecki and all are unique, according to Maggie Lieber, show co-chair.

Another one of the vendors is Michael W. Harris of M. H. Fine Jewelry Design and his sterling silver jewelry, which he said he has been doing for about a decade.

Harris said his wife has a charity called International Street Angels of the World, which supports a shelter for homeless children. He started stringing beads to raise money for them and progressed to where he is now, he said. The money he makes from the endeavor goes to the charity, Harris said.

When it comes to figuring out what to make and how to craft it, Harris said he it all starts with the stone and goes from there.

“It has to fit the stone,” he said, calling to attention the different shapes of the pieces.

The show also has demonstrations including cutting and polishing gemstones, wire wrapping and gold panning, allowing people to see the process from a piece of rough rock to a finished piece of jewelry. There is also geode splitting.

The show opens at 9 a.m. with a grand prize raffle drawing at 3 p.m. Admission is $5 for adults, $4 for seniors, veterans and students and free for children 12 and younger.

The Findlay Toyota Center is located at 3201 N. Main St.