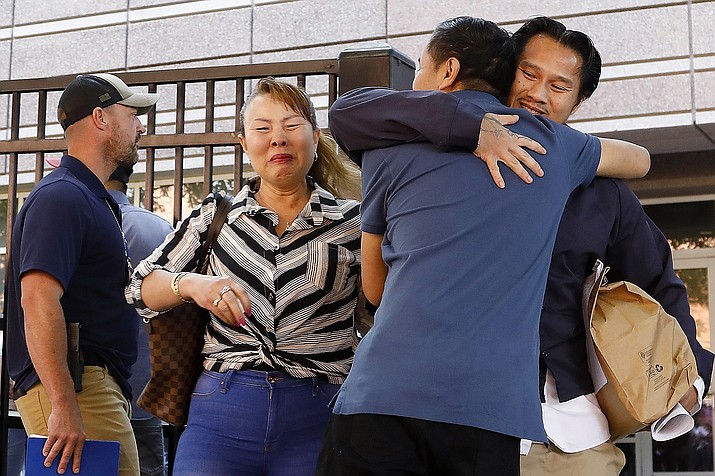 In this Wednesday, June 12, 2019 photo, Ammala Mingsouan embraces family outside the building that houses Immigration and Customs Enforcement and the Atlanta Immigration Court after being released from ICE custody, in Atlanta. (Andrea Smith/AP)

LOS ANGELES — Rosita Lopez said armed gang members demanded money from her and her partner at their small grocery store on the Guatemalan coast and threatened to kill them when they couldn’t pay. When her partner was shot soon afterward, they sold everything and fled north.

Lopez was eight months pregnant when the couple arrived at the U.S.-Mexico border last year with their 1-year-old daughter. Just over a year later, an immigration judge in Los Angeles heard her case, denied her asylum and ordered her deported.

“I’m afraid of going back there,” she told the judge.

The decision for 20-year-old Lopez — who now has an American-born baby — was swift in an immigration court system so backlogged with cases that asylum seekers often wait years for a hearing, let alone a ruling on whether they can stay in the country.

But her case is one of 56,000 in a Trump administration pilot program in 10 cities from Baltimore to Los Angeles aimed at fast-tracking court hearings to discourage migrants from making the journey to seek refuge in the United States. The administration selected family cases in those cities from the past 10 months.

Immigration lawyers who often complain that it takes too long to get a court date said the new timetable is too fast to prepare their clients to testify and get documents from foreign countries to bolster their claims.

“The families that are all ready to go and desperate, ready with counsel, have survived multiple atrocities can’t seem to get before the judge, and others who seem to need time to get their cases together, they’re pushing through without due process,” said Judy London, directing attorney of the immigrant rights’ project at Public Counsel, a pro bono law firm in Los Angeles.

The program is one way the Trump administration is seeking to curtail the arrival of tens of thousands of Central American families each month on the U.S.-Mexico border, many seeking asylum. Federal courts have blocked several efforts to limit asylum for the families, including rules that would prevent most migrants from seeking asylum in the U.S. if they passed through another country first .

Speeding up court hearings aims to prevent migrant families from setting down roots while they wait to find out whether they qualify for asylum.

Immigrants can get permits to work legally in the United States once their asylum applications are pending before a judge for six months, which many with fast-tracked cases won’t get to do, lawyers said.

The goal is to “disincentivize families — where an overwhelming majority of cases don’t qualify for relief, but instead end with removal orders — from making the treacherous journey to the United States,” Immigration and Customs Enforcement said in a statement.