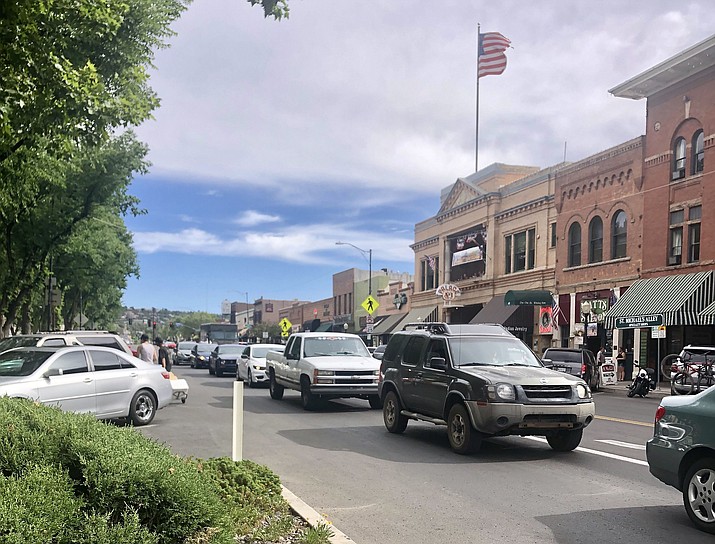 Downtown traffic congestion has been a consistent issue at recent City Council candidate forums. The corner at Gurley and Montezuma streets, which tends to get clogged at the traffic signal, is among the areas of concern. (Cindy Barks/Courier)

Editor’s Note: This is the seventh in a series of questions that the Daily Courier posed to the five candidates running for Prescott City Council, leading up to the Aug. 27 primary.

By the last week of August, downtown pedestrians could be in for a “scramble” at the corner of Gurley and Montezuma streets.

In the wake of a recent push by Prescott City Council members and local residents to improve downtown traffic, the Prescott Public Works Department is preparing for a several-week trial of a “pedestrian scramble” at the busy Whiskey Row intersection.

City Traffic Engineer Ian Mattingly said work is already underway on the signage, striping and lighting changes that will be necessary for the scramble.

WHAT IS A PEDESTRIAN SCRAMBLE? 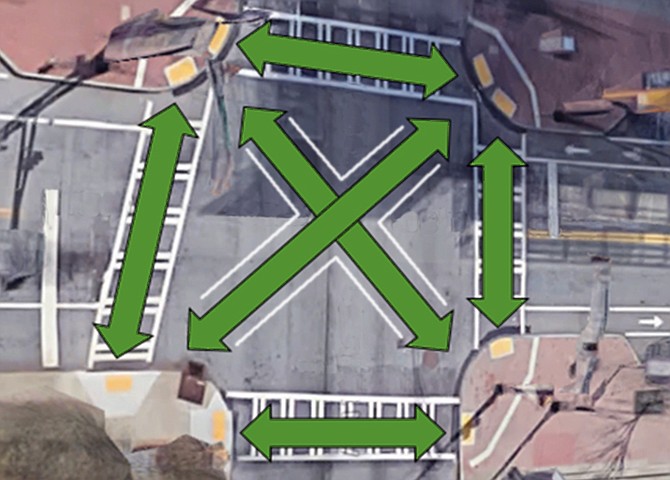 The "Pedestrian Scramble" idea has been one of the options city officials have suggested to address clogged Prescott downtown intersections. The concept involves periodically stopping all vehicular traffic for 25 to 30 seconds, allowing pedestrians on all four corners of the intersection to walk at the same time. Along with being allowed to cross to the opposite street, pedestrians also could cross diagonally.

Mattingly explained that the concept involves periodically stopping all vehicular traffic for 25 to 30 seconds, allowing pedestrians on all four corners of the intersection to walk at the same time. Along with being allowed to cross to the opposite street, pedestrians also could cross diagonally, he said.

Also as a part of the scramble concept, pedestrians would not be allowed to cross while vehicles have the right-of-way.

“Pedestrians would not walk along with vehicular movement,” Mattingly said.

The scramble idea has been one of the options that city officials have suggested this summer, as local residents and officials have complained about increasingly clogged downtown intersections. 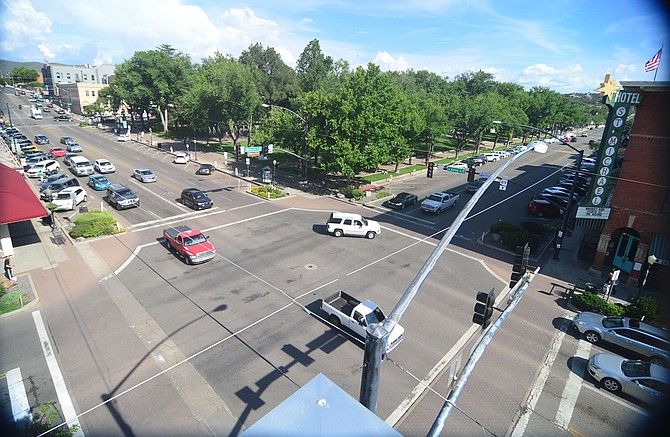 City of Prescott officials will try out a scatter crosswalk system later this month at the intersection of Gurley and Montezuma streets as seen in the late afternoon Friday, Aug. 2, 2019, in downtown Prescott. (Les Stukenberg/Courier)

One of the main problem areas has been the Gurley/Montezuma corner, where cars turning right or left are often delayed by crossing pedestrians, which, in turn, blocks vehicular traffic behind them. Traffic regularly backs up all the way down Whiskey Row, causing drivers to wait two or three signal cycles to get through the intersection.

He estimated that the trial period would begin by the last week in August or the first week in September. To help determine how the new system is working, Mattingly said the goal is to have the scramble configuration in effect during times of normal traffic, as well as for a special downtown event.

The amount of time that will be allowed for pedestrians is still being determined, but Mattingly said it likely would run about 25 to 30 seconds.

The increasing traffic downtown has come up consistently during recent candidate forums in the 2019 election season. Ballots for the city primary were mailed out to Prescott registered voters this past week, and are due back by 7 p.m. on primary day, Aug. 27. 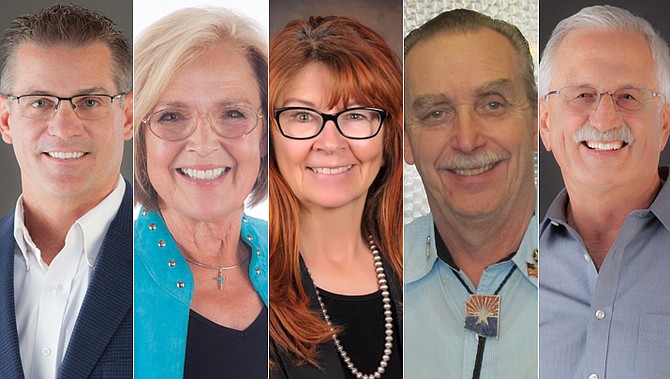 Leading up to the primary, the Daily Courier asked each of the four candidates running for Prescott City Council, as well as one for mayor, to comment, in 70 words or less, on how to improve traffic in Prescott’s downtown.

How would you improve traffic flow in downtown Prescott? Would you support one-way streets or all-walk (pedestrian scramble) traffic signals?

Jim Lamerson: I like it the way it is. Maybe (to one-way streets).

Greg Mengarelli: There are certainly some things we can do to improve traffic flow in our downtown. I am all for trying new things including an all-walk pedestrian crossing. I think we need to do a better job of getting people to park in our underutilized parking garage downtown, which will increase pedestrian traffic and reduce vehicular traffic. We need to consider how to make our downtown more pedestrian- and bike-friendly.

Billie Orr: I am definitely open to all ideas, especially the all-walk traffic signals around the plaza. I think we should do a much better job timing lights from one intersection to another. I serve as chair of Central Yavapai Metropolitan Planning Committee (CYMPO). We are working regionally to address transportation issues with the county and other municipalities. We have been instrumental in widening State Route 89, State Route 69 and securing funding for Interstate 17.

Cathey Rusing: Fixing traffic flow and safety downtown must be a priority with the council. Timing of lights and installing “smart lights” should be done. More safe sidewalks, bike lanes and paths should be built. Streets need to be striped properly and crosswalks zebra striped in safety yellow like school crosswalks to be visible. These common-sense solutions need to be implemented. A comprehensive traffic study is way overdue.

Steve Sischka: I doubt if we could do one-way streets, because South Montezuma is a state highway, simply maintained by Prescott. The big problem is the bottleneck of cars trying to turn east from Montezuma onto Gurley. It would be far better if an east turn was encouraged from Cortez to Gurley where there are not as many pedestrians crossing. All-walk sounds enticing, but in reality, pedestrians being pedestrians, they may stretch the limits and continue to hold up traffic.