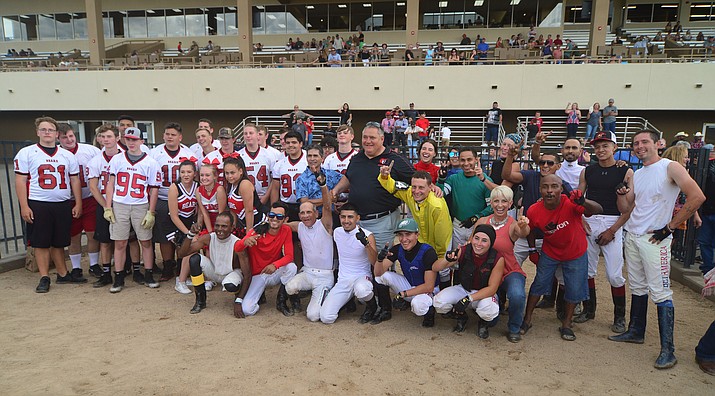 PRESCOTT VALLEY — There is strength in numbers! As part of a back-to-school event at the Arizona Downs, the racetrack's regular jockeys defeated Bradshaw Mountain football players in a “Jocks vs. Jockeys” tug-of-war fundraiser on Saturday, Aug. 3.

This friendly competition of a tug-of-war between 1,500 pounds of burly high school football players and 1,500 pounds of petite jockeys definitely did not disappoint. Proceeds from the bets were split among the winning team, the BMHS Boosters Club and the Permanently Disabled Jockeys Fund.

Following the sixth horse race of the day, the two sides made met out on the muddy racetrack, but it was evident the jockeys brought along with them a lot more energy than the football players. The tug-of-war lasted for about a minute as neither side was willing to give up an inch halfway through.

However, the football players’ stamina soon began to waver, allowing the scrappy jockeys to make one final haul to put them over the top. A brief but boisterous celebration from the jockeys then ensued, but they were sure to congratulate their opponents after a hard-fought contest. 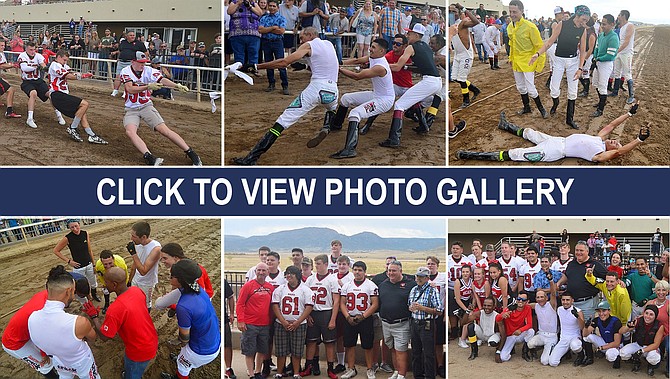 “When (the football players) started pulling, we realized how strong they were and we just kicked it into high gear,” jockey Luis Valenzuela said. “I feel like they pulled us about a foot maybe, and after that, we just started pulling from there. They started trying harder and we started trying harder and it was like a duel going on. But I feel like they got tired and we just kept on going.”

Even in defeat, the Bradshaw Mountain football players were still in high spirits as sophomore linebacker Calvin Mayotte admitted he and his teammates underestimated the jockeys a little bit.

“Definitely,” Mayotte said. “We thought that because it was by weight, it would be kind of even, but that didn’t really work out so we definitely underestimated them.”

Arizona Downs Back-to-School event to give away supplies to teachers
Bears down Mingus, stay unbeaten in region
Local teams in middle of pack after Day 1 of Mile High Challenge
Bears get better of St. Mary’s in home opener
Bears put the beatdown on P-town