This weekend rocks with more than 60 vendors expected 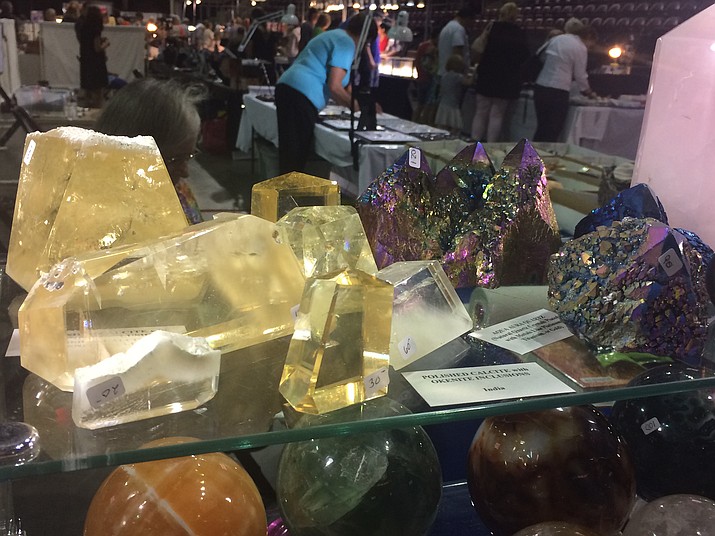 This year, the show is host to the Rocky Mountain Federation of Mineralogical Societies Convention, said Co-Chair Maggi Lieber.

“It’s kind of a feather in our cap,” Lieber said. “They actually approach clubs that they deem worthy, they’re not going to go to somebody that just has like a flea market or something like that.”

The club has been approached before about hosting the conference but were not equipped at the time, because doing so means putting on a banquet and having conference rooms available, she said. Now that the event is at the Findlay Toyota Center, the club is able to host it, Lieber said.

The show, held Friday through Sunday, Aug. 2-4, has more than 60 vendors coming and they’re all unique, she said. The process for vendors to be able to be a part of the show is selective and by invitation, Lieber said. They have to have 80% of their merchandise be lapidary-gem and mineral-related and everything is one of a kind, she said.

Prescott Gem and Mineral Club members also do demonstrations all week long, including cutting and polishing gemstones, wire wrapping and gold panning, Lieber said. It allows people to see the process from a piece of rough rock to a finished piece of jewelry, she said, That one of the most popular things to do at the event is geode splitting.

“We have (more than) 3,000 pounds of geodes coming to be split,” she said. “It’s kind of neat that you can take this hunk of rock, have it opened and you are the first person to see what’s inside in the entire world.”

The show starts at 9 a.m. all three days, with a grand prize raffle drawing at 3 p.m. each day. It’s geared toward everyone, from the people who like to look at pretty things to those who make lapidary, gems and minerals their livelihoods, Lieber said.

Admission is $5 for adults, $4 for seniors, veterans and students and free for children 12 and younger.

Lieber said she enjoys the relationships that she’s developed with fellow club members, as well as some of the vendors, through the Prescott Gem & Mineral Show and Sale. It’s a great rush seeing them because she doesn’t get to see them quite often, she said.