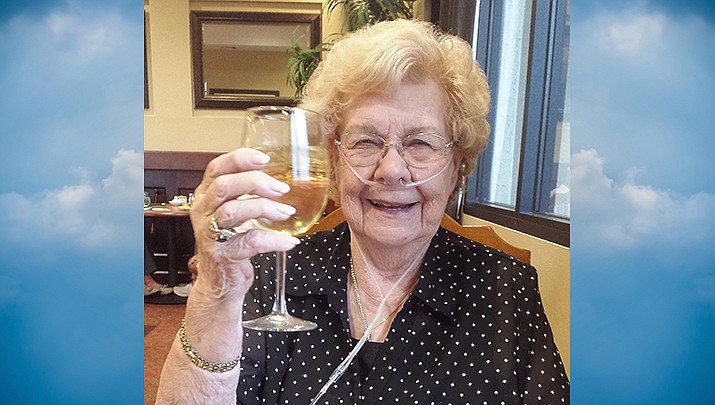 Marion Margaret “Peg” (Simmons) Fischer joined her husband, George, and oldest son, Chris, in the company of our Lord Jesus on April 18, 2019.

Peg was born in Toledo, Ohio, on Sept. 19, 1923, to Joseph and Laura Simmons, as the youngest sister to Fr. Hilary Simmons and Sr. Laura, O.P. Simmons. She attended St. Joseph Academy, in Adrian, Michigan, and later, worked as the first female draftsperson at Owens Libby in Toledo.

Peg married George in 1944 and lived as the wife of a Navy pilot until they settled back in Toledo, where they raised four children, Chris, Bruce, Greg and Cindy.

In the late 1960s the family moved to Southern California to live in sunshine. Peg helped run son Chris’s business, SRE, Inc., until she retired at age 76. After George’s passing in 1996, “Ma Fischer” became a staple at sprint car races to cheer on Car 29, owned by Fischer Motorsports, until she moved to Prescott to live with Cindy and her husband, Don, in 2004. Here, she joined the Grape Nuts Red Hats, played bingo whenever and wherever she could and visited the casino to play penny slots.

The last few years, Peg enjoyed the comfort of Alta Vista Senior Living and was cared for by an attentive and devoted staff.

Peg is survived by her sons, Bruce, Greg (Sharon); daughter, Cindy (Don); and daughter-in-law, Jan. Peg was blessed with five grandchildren, Jason, Kim, Erin, Kelly and Sarah; and six great-grandchildren, with another on the way.

The family thanks Kindred Hospice for their care and support.