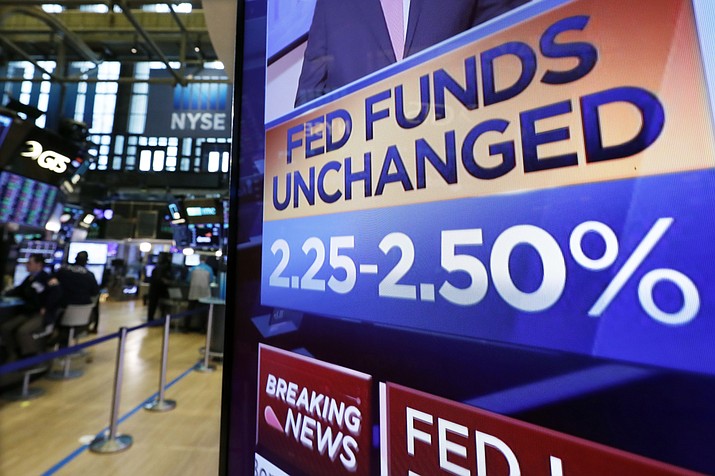 A screen on the floor of the New York Stock Exchange shows the rate decision of the Federal Reserve, Wednesday, March 20, 2019. (Richard Drew/AP)

NEW YORK — It is not only the stock market at a record high that’s feeling the Fed effect.

Jewelry shoppers, home buyers, retirees and many others are feeling the ramifications of the Federal Reserve’s decision earlier this year to halt raising interest rates, at least temporarily. For some investments, it’s been for the better.

For others, not so much.

It all started on Jan. 4, when Fed Chairman Jerome Powell took the stage at an Atlanta conference for economists and said the Fed would be “patient” in raising rates.

Two weeks earlier, the stock market had dropped to nearly 20 percent below its September peak amid an accelerating sell-off, partly because of worries that the Fed would push the economy into a recession by raising rates too far, too fast. Those fears had ratcheted higher in December when the central bank raised its key short-term rate for the eighth time in nine quarters.

Many investors took Powell’s statement to mean that the Fed would take a break from raising rates for a while. In March, the central bank said it may not raise rates at all in 2019.

The moves have helped make stock investors whole again this year, as the S&P 500 screamed higher to return to another record this past week.

Home buyers are also relaxing a bit, as the Fed’s moves have helped pull the average rate on a 30-year fixed mortgage down to 4.20 percent from 4.55 percent at the end of last year.

Here’s a look at how other areas of the market are feeling the Fed effect:

GOLD IS GETTING SCUFFED

Jewelry buyers are getting a better price on gold. An ounce of gold settled below $1,275 on Tuesday for the first time this year, and it’s well below its perch of nearly $1,350 in February.

This may surprise some investors because the price of gold often rises when the Federal Reserve moves away from raising interest rates. But gold tends to draw the most investors when worries are high about the economy’s strength or the prospect of inflation. That’s why gold was climbing last year when recession fears were spiking.

Now that more investors see the risk of recession as off the table, thanks to the Fed’s changed stance, there’s less fear in the market — and less demand for “safe” investments.

The yield on the 10-year Treasury has dropped to 2.53 percent from 2.68 percent at the start of the year, and analysts along Wall Street have been ratcheting down their forecasts for where yields will end this year.

When interest rates drop, it means that prices for older bonds rise because their higher yields suddenly look more attractive than what newly issued bonds offer. That’s helped the largest bond mutual fund by assets, Vanguard’s Total Bond Market Index fund, to return 2.5 percent in 2019, as of Wednesday. That is more than it has in three of the past four full years.

It’s a sharp turnaround from 2018, when many bond funds lost money due to a rise in interest rates. And it means the part of investors’ portfolios that’s supposed to offer the most stability — at least when compared against stocks — are providing solid returns again.

When the Fed was steadily pulling rates higher in recent years, savers were some of the biggest beneficiaries. After struggling for years earning very little on their savings, they had just begun to make a bit more on their money-market accounts and certificates of deposit at the bank.

Savings accounts at big banks are still often paying nearly nothing, but offerings from online banks are offering yields that are higher than inflation. Now that the Fed is on pause, though, the gains may stall.

The national rate on a one-year CD has gone six weeks without an increase, the longest streak since 2017.