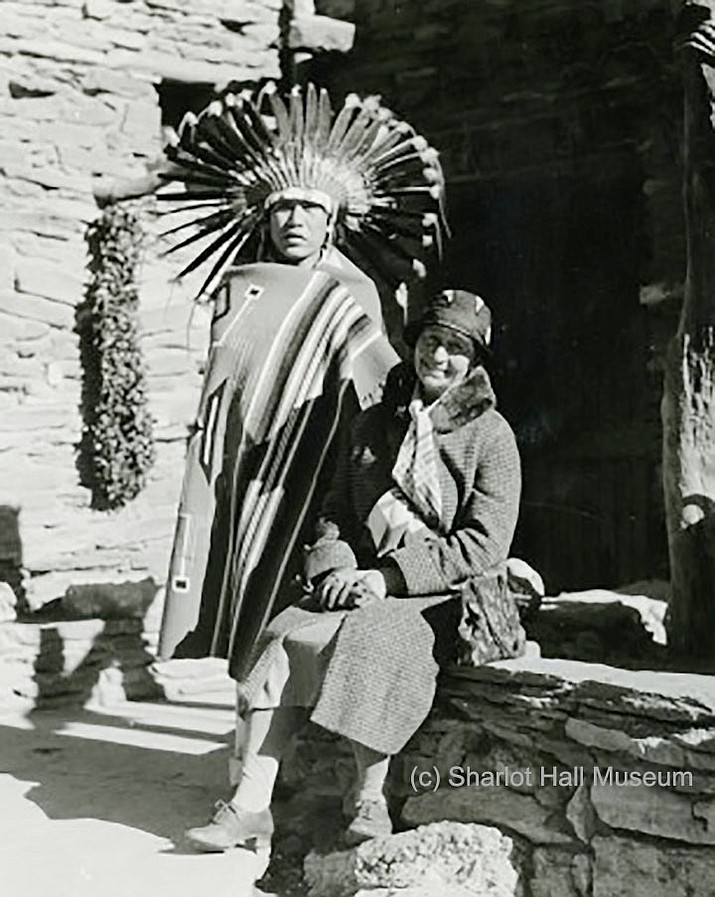 Compiled from Days Past articles by Barbara Patton and research and writings by Sue Kissel, Brenda Taylor and Nancy Kirkpatrick Wright.

Kate Thomson Cory was born on Feb. 8, 1861, in Waukeegan, Illinois, to James and Eliza Cory. She was raised with a sense of justice and respect for all; her father was an abolitionist, Underground Railroad supporter and friend of Abraham Lincoln. In the late 1870s, the family moved to New York City, and, encouraged by her mother, Kate studied art at the distinguished Cooper Union for the Advancement of Science and Art where she had success as a landscape artist.

In 1905, Kate met Louis Akin who had been in Arizona painting portraits of Hopi people and village scenes. His descriptions of the vivid colors and majestic panoramas of the Southwest piqued Kate’s interest, as did the idea of joining his proposed artist colony on Hopi lands.

She was a pioneer woman in more than the usual sense — as a single woman of 44, she traveled alone to the Hopi mesas of Arizona to join Akin’s artist colony. No one else showed up. She had a round-trip ticket home, but as she looked west and saw the mountains in the distance, her spirits rose. “That wonderful group of mountains, I now saw, like sapphires, bloomed with opal, pulsing on the horizon. They lifted the desolation into the sublime. I’d stay awhile anyway.”

“Awhile” became seven years. While living in the pueblo of Old Oraibi, Kate became friend and confidant of the Hopi, and as a talented artist, her photographs, paintings and writings leave us an extraordinary picture of the color and mystery of the Hopi. She became an adopted member and was given the name “Paina Wurta”, meaning “Painter Woman.”

In addition to her art, Kate taught at the Polacca Day School near the Hopi village of Walpi on First Mesa for many years. While there, she compiled a dictionary titled “Hopi Alphabet” containing more than 900 Hopi words and phrases, becoming a valuable ethnographer of the tribe. She contributed articles to publicize the Hopi culture and worked with the government to document the unsanitary conditions and housing on the reservation in hopes of improving the situation.

By 1912, Kate was ready to leave the reservation. Her age and the primitive conditions were taking their toll. In addition, the tribe and the government were placing more restrictions on her activities. As a farewell to the Hopis, she painted “Return of the Kachinas”, a mystical scene of the Katsinas returning to their mountain home after a visit to the village.

At 51, Kate moved into her little pueblo style stone house in Prescott in the Idylwild Tract on Thumb Butte Road where she continued to live as simply as on the reservation. She continued her work as artist and sculptor, becoming one of the West’s most famous artists. In 1915, Sunset Magazine named her one of Arizona’s most “interesting westerners.”

She became fast friends with Sharlot Hall, Arizona historian, curator and museum founder, and designed the cover of Sharlot’s book” Cactus and Pine: Songs of the Southwest”. As part of Prescott’s Way Out West program, she assisted in various dances performed by Smoki members at the Prescott Frontier Days rodeo.

At 97, after a life well spent in art, as an observer of Hopi life, and in service to others, Kate Thomson Cory passed away at the Pioneer Home in Prescott on June 12, 1958, and is buried in the Arizona Pioneer Cemetery.

Today, her paintings are found in the Smoki and Sharlot Hall museums, private collections of friends and relatives and the Smithsonian Institution. Cory Avenue off West Gurley Street in Prescott is named for her.

Due to the research and efforts of Nancy Kirkpatrick-Wright, Sue Kissel and Brenda Taylor, Kate Cory will be inducted into the Arizona Women’s Hall of Fame on May 1, 2019, at the Arizona Historical Society’s Heritage Center in Tempe.