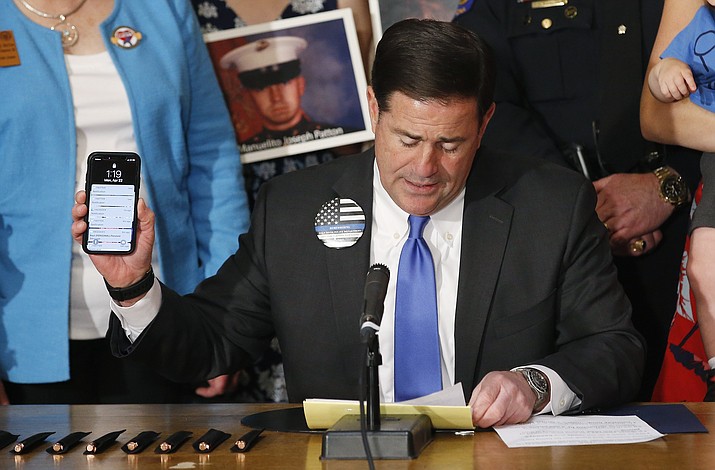 Arizona Gov. Doug Ducey speaks prior to signing into law a bill banning texting while driving Monday, April 22, at a ceremony at the Arizona Capitol in Phoenix. On Friday, April 26, Ducey vetoed a distracted driving bill, a companion bill to the cell phone bill, saying he did not want Arizonans to confuse the two. (Ross D. Franklin/AP, file)

Editor's note: This legislation vetoed by Gov. Doug Ducey today should not be confused with the new state texting ban. SB 1141 was a separate distracted driving bill. The texting while driving law was signed by Gov. Ducey on Monday, April 22, 2019.

In a message to lawmakers, the governor pointed out that he signed a measure earlier this week that prohibits the use of hand-held devices for calling, texting, watching videos and other activities.

“The hands-free mobile device policy is narrowly tailored to a specific behavior — using our mobile devices while driving,’’ Ducey wrote.

Technically speaking, nothing in the bill that the governor vetoed would have overridden or affected the ability of police to enforce that law. But Ducey said he feared that having two new laws on the same subject would muddy the issue.

“I am concerned that SB 1141 does not give drivers clear direction about what activities are prohibited and how the law will be enforced,’’ he wrote.

The governor, however, said he was not closing the door forever on the idea of a broad law to deal with inattention by motorists.

“I want to continue the conversation around traffic safety,’’ he said. “And I remain open to future legislation that addresses distracted driving.’’

The veto is an apparent about-face for the governor, at least as far as this approach to dealing with the problem.

In January, in the wake of the death of a Salt River police officer killed by a texting motorist, the governor noted that there was “talk of a bill last year of distracted driving.’’

“Had that gotten to my desk, I would have signed it,’’ Ducey said at the time. “I want to make sure that we prevent and avoid this type of tragedy in the future.’’

And Sen. J.D. Mesnard, R-Chandler, who crafted the measure, said what the governor said in his Friday veto “is different than what his office had previously told me about my bill.’’

Mesnard argued that his approach was a preferable way of dealing with the fact that people with phones in their hands — as well as hot dogs, makeup and anything else — are hazards. And it was also far simpler than HB 2318, the measure that Ducey signed on Monday.

In essence, it created a two part-test.

The first said that people cannot engage “in any activity that is not related to the actual driving of the motor vehicle in a manner that visibly interferes with safety.” But even that would not be enough to stop a motorist. The second part would require the vehicle being driven “in a manner that is an immediate hazard to a person or property’’ or the driver not “exercise reasonable control’’ to avoid hitting someone or something.

It is those conditions that likely are behind Ducey’s concerns about the mixed message.

What approval of SB 1141 would have meant is that drivers could still be texting chatting on a hand-held phone and not fear being stopped as long as they maintained control of the vehicle.

And Ducey, in his veto message, made it clear that he believes that the simple act of using a cellphone, by itself, creates a hazard.

“Data shows that prohibiting this behavior saves lives,’’ the governor wrote in his veto message.

While HB 2318 takes effect immediately, it is not really enforceable: Police can issue only warnings until 2021. And there are exceptions for using hands-free devices to talk or text.

Mesnard, for his part, has maintained that it is wrong to focus on just one type of distraction. And he said the state Department of Public Safety has estimated that only about a quarter of distracted driving incidents are due to cellphone use.

“That’s why I introduced a distracted driving bill,’’ Mesnard said.

The governor’s office provided no immediate response to questions about Ducey’s statements in January or whether the governor had changed his mind.

The veto comes as Ducey and Mesnard have been squabbling publicly for months about whether the state should be able to collect and keep an extra $150 million from Arizona taxpayers because of changes in federal tax law.

The Tax Cut and Jobs Act approved in 2017 by Congress cut tax rates and boosted the amount of the standard deduction available to people who do not itemize. But it also eliminated or reduced other deductions, such as for amounts paid in state and local taxes and some mortgage interest charges.

Ducey wants the state to “conform’’ to those changes, effectively eliminating those same deductions for Arizona residents on their state income tax forms. But Mesnard has led the fight to force the state to refund the excess dollars, even sponsoring legislation to lower state income tax rates -- only to have that, too, vetoed by Ducey.

The spat remains unresolved, with Mesnard and most Republicans refusing to allow what they call a “windfall’’ and Ducey wanting to put the unanticipated revenues into the “rainy-day’’ fund.

So does Mesnard believe this veto is payback?