Wine, Bites & Brew is Saturday, one hour longer this year 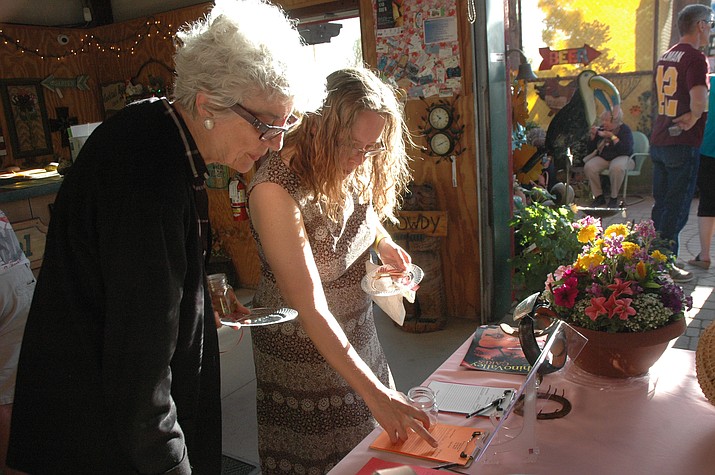 Sandy Stutey and Christine Dixon check out one of the silent auction items at the first Wine, Bites & Brew. (Jason Wheeler/Review, file)

After nobody wanted last year’s inaugural Wine, Bites & Brew to be over, this year’s second annual event is going to be longer, said Chino Valley Area Chamber of Commerce Executive Director Lorette Brashear.

“People didn’t want to leave,” Brashear said. “So we’ve extended it by one hour.”

Additionally, Courier Cares has become a part of the event.

Courier Cares has added to the event by giving awards to the best bite, the best brew and the best wine, Brashear said. Judging will begin before the event starts, so by the time people arrive at 5 p.m. they will be able to find out which entries won, she said.

Lew Rees, events and marketing director for Western News & Info, said that in his many years of chamber work, he has orchestrated and been part of many food events. Rees said he really enjoys them, and he wants to make sure this event builds year after year and becomes a certain success for the Chino Valley Area Chamber of Commerce and the Chino Valley Lioness Club.

Wine Bites & Brew is near and dear to the chamber, Lionesses and Chino Valley, he said. It is thrilling to partner with them to bring the event to the community, Rees said. “It will be another flagship (event) for the chamber and the Lionesses for years and years to come,” he said.

If there’s no place to park at Earthworks Garden Supply, people can park in front of Mazy’s, 396 W. Road 3 North, and Yavapai Regional Transit will provide transportation to the event.

Even if people don’t want to drink, the event has something for them, Brashear said. Valley of Vitality will be giving massages, Virtual Odysseys will be there with their virtual reality games, Georgia Atwell will be doing Mary Kay sampling, people will be able to get their vows renewed, and representatives from Heritage Park Zoological Sanctuary and Overflow Coffee will be present, too, she said.

There also will be drawings, a silent auction and music by Brad Newman, Chad Rubin and Note to Self, Brashear said.

“Three really great bands, two that are not local,” she said. “We just wanted to be a little bit different and bring a little bit more variety to the area.”

Money brought in from Wine, Bites & Brew goes to helping different local organizations, Brashear said. Last year it went to the Hungry Kids Project, to the Chino Valley Police Department and its Stop the Bleed campaign and to the Chino Valley Unified School District.