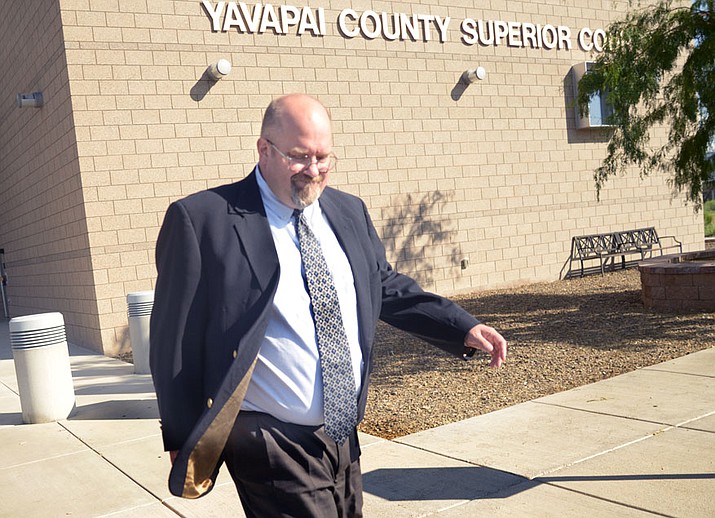 Former Prescott pastor Thomas Chantry walks out of the Yavapai County Superior Courthouse in Camp Verde on Aug. 21, 2018. Chantry is accused of multiple instances of abuse and molestation involving the children of his former congregation. (Vyto Starinskas/Verde Independent, file)

Two decades later the 48-year-old now Wisconsin resident is accused of multiple instances of abuse and molestation involving the children in his former congregation.

“He used his position as a pastor to torment, terrorize, assault and molest an 11-year-old boy,” said County Attorney Susan Eazer in her opening argument Thursday at the Yavapai County Superior Court in Camp Verde. Chantry is being retried on four molestation charges that involve the same accuser. Chantry is also facing nine other charges involving child abuse and molestation in another case.

Accusers and their families first reported incidents of abuse to the church but no reports were made to the police until 2015.

“He used fear of god to control them and abuse them … silence them for years,” Eazer said.

Eazer went on to describe events leading up to the accuser’s abuse. The accuser, was receiving tutoring lessons from Chantry when the alleged molestation took place. She said Chantry would spank him as punishment for getting questions wrong and other arbitrary reasons. The spankings eventually turned into molestation.

Chantry’s defense attorney Ryan Stevens said in his opening argument that the case was about corporal punishment, not molestation.

“If we get lost in the weeds, we lose fairness,” he said.

Stevens said the accuser’s parents actually gave Chantry permission to use corporal punishment on their son after he had gotten in a fight with his brother.

“Spanking kids too hard, that can cause problems – I get it,” Stevens said. “But it’s not molestation.”

Stevens urged jurors to focus on what Chantry is being charged with.

“We’re not sitting here saying molestation is acceptable,” he said. “We’re saying (the accuser) is not telling the truth. We don’t enjoy that but that’s what has to be done.”

The accuser, now 34 and a father of two, was called to the witness stand Thursday. He had already testified once before over the summer.

The man said he grew up in a religious family and that his father would use corporal punishment on him, but not often.

The man said when Chantry first came to Miller Valley Baptist Church, his parent would invite him over for dinner. Then Chantry offered to tutor him. His parent obliged.

The spankings started during the second tutoring session, according to the man’s testimony.

“It was because I was talking back,” he said. “The first time he put me over his knee … it wasn’t that bad.”

The spankings would eventually get worse, however.

During catechism lessons, “he would have me bend over and answer questions, he would hit me until I got it right.”

“After he spanked me I rubbed myself – my rear,” he said. “He told me I wasn’t allowed and he spanked me again. Then he put me on his lap and rubbed my (rear.)”

The rubbing of the bottom would eventually turn into molestation, according to the man’s testimony.

Over the summer, Chantry was tried on five felony charges of child molestation and three aggravated assault charges.

They were deadlocked on the other four molestation charges by just one juror.

According to court documents, one of the jurors is currently under investigation for juror misconduct.

“...the juror had in fact failed to disclose a prior arrest, incarceration and criminal charges in Yavapai County,” records state.

The juror also admitted to not disclosing a prior DUI conviction and several other arrests in other jurisdictions.