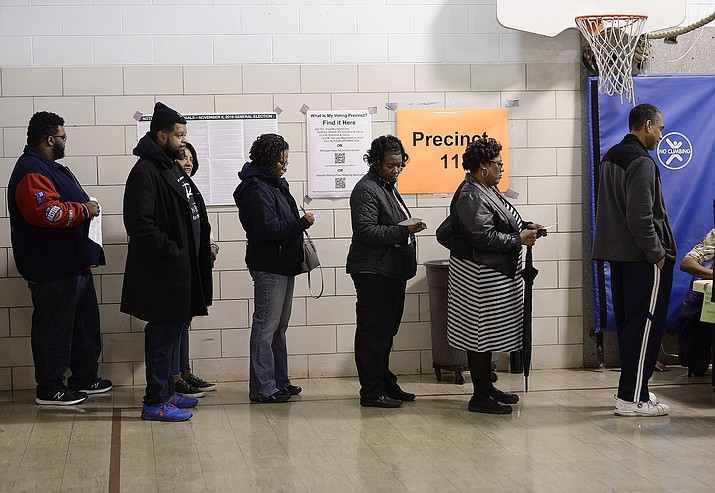 Voters wait in line on Election Day, Nov. 6, 2018, in Southfield, Mich. A three-judge panel has ruled that Michigan's congressional and legislative maps are unconstitutionally gerrymandered, ordering the state Legislature to redraw at least 34 districts for the 2020 election. (Clarence Tabb, Jr /Detroit News via AP, File)

LANSING, Mich. — Michigan must redraw dozens of congressional and legislative districts for the 2020 election because Republicans configured them to guarantee their political dominance over the last decade by unconstitutionally diluting the power of Democratic voters, federal judges ruled Thursday.

In a 3-0 ruling — which will be appealed — the panel gave the GOP-led Legislature and new Democratic Gov. Gretchen Whitmer until Aug. 1 to enact new maps for nine of 14 congressional seats and 25 of 148 legislative districts. The number of newly cast seats would be higher, though, because of the impact on adjacent districts.

The judges also ordered that special state Senate elections be held in 2020, halfway through senators' normal four-year terms. The panel said it would draw its own maps if new ones are not submitted or if those that are proposed do not comply with constitutional requirements.

The decision was the latest development in a series of lawsuits alleging unconstitutional gerrymandering in a dozen states. The U.S. Supreme Court is considering whether to set limits on partisan mapmaking.

"Their primary goal was to draw maps that advantaged Republicans, disadvantaged Democrats and ensured that Republicans could enjoy durable majorities in Michigan's congressional delegation and in both chambers of the Michigan legislature for the entire decade," they wrote.

GOP legislators vowed to appeal to the Supreme Court.

"We will prepare to comply with this most recent ruling while we await the outcome of the appeal," Senate Majority Leader Mike Shirkey said in a statement. The state Republican Party said the pending appeal is needed to "uphold the will of Michigan voters."

The suit was filed by the League of Women Voters of Michigan and Democratic voters who claimed districts were shaped by Republicans to ensure the party's supremacy in the state Capitol after the 2010 census. They said constitutional rights were violated when Democratic areas were packed in certain districts or diluted elsewhere.

The court agreed, ruling that oddly shaped seats — such as the Democratic-held 9th Congressional District in suburban Detroit — were drawn to strategically wrap around and exclude, "in a snakelike fashion," Republican areas, contributing to the packing of Democratic votes.

"A wide breadth of statistical evidence indicates that the enacted plan's partisan bias has proven severe and durable; it has strongly advantaged Republicans and disadvantaged Democrats for eight years and across four separate election cycles. Moreover, the enacted plan represents a political gerrymander of historical proportions," the judges wrote. Two were nominated by former President Bill Clinton; the other was appointed by President George H.W. Bush.

New Democratic Secretary of State Jocelyn Benson had attempted to settle the case by proposing that the Legislature redraw 11 of 110 state House seats — excluding state Senate and congressional districts — but the panel rejected her proposal and held a trial in February.

"The court's ruling confirms that these Michigan state House and Senate and U.S. congressional districts are unconstitutional," Benson said in a statement. "I respect that decision, as should we all. As the state's chief election officer, I'm committed to working with the Legislature, citizens and the court to ensure the new districts comply with our U.S. Constitution."

The suit pertains only to 2020. Michigan voters in November approved a constitutional amendment creating an independent commission to handle the typically once-a-decade redistricting process after the 2020 census, which will affect the 2022 election and beyond.

Michigan is among five states where Republicans retained control of the state House even though Democratic candidates won more votes statewide last fall, an analysis by The Associated Press found.

"Today is a great victory for the voters of Michigan and for our democracy," Judy Karandjeff, president of the League of Women Voters of Michigan, said in a statement. "The state will now draw new district lines before the next federal election, which now will better reflect the makeup of the voters — not the interests of the politicians."