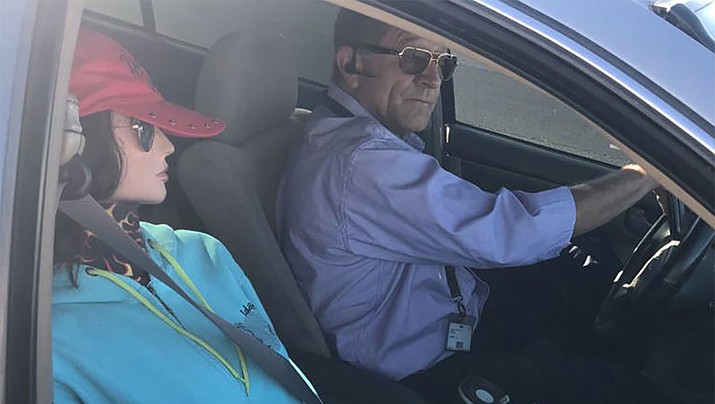 A driver was caught using a mannequin as a fake passenger to drive in the carpool lane on Loop 202 in Phoenix on Tuesday, April 23, 2019. (Arizona Dept. of Public Safety/Twitter)

PHOENIX — The Arizona Department of Transportation cited a man driving with a mannequin in the HOV lane on Loop 202 Tuesday.

ADOT tweeted two photos showing the driver and the dummy after he was pulled over by a trooper on State Route 202 at Alma School Road.

Trooper Doug Keenan said he noticed something wasn't right when the person in the passenger seat would not move.

“When I contacted the driver, he almost acted as if I wouldn’t notice it,” Keenan said.

What the trooper discovered was a mannequin dressed in a red cap, sunglasses and a blue hoodie sweatshirt.

Under Arizona law, there must be at least two (real live) people in a vehicle to use the HOV lanes Monday through Friday from 6 a.m. to 9 a.m. and 3 p.m. to 7 p.m. Drivers caught violating HOV rules are subject to a $400 fine.

Vehicles with Blue Sky Arizona license plates, motorcycles and buses are allowed in the HOV lanes during the restricted times.

In September, DPS troopers stopped two other drivers using fake passengers. One used a similar mannequin and the other set up a baby doll in a car seat.

Another one Busted! Don’t let this be you.... A driver was cited for HOV lane violation along the SR 202 at Alma School, for having a dummy masquerade as a passenger. pic.twitter.com/97xZVyi9dC

Busted! On Sept 7th, a trooper stopped a driver for an HOV Lane violation on the L-202 Red Mountain at Van Buren. Needless to say, the driver was issued a citation. Troopers cite over 4,000 HOV Lane violators annually. pic.twitter.com/mfCkz5eXrJ

Another One Busted! On Sept 11th at 5:40 p.m., one of our motor troopers stopped a driver for an HOV Lane violation on the e/b side of L-202 San Tan near Alma School. The 48-year-old woman of Chandler told the trooper she was on her way to pick up her grandchild. pic.twitter.com/AMeuzgdLu9