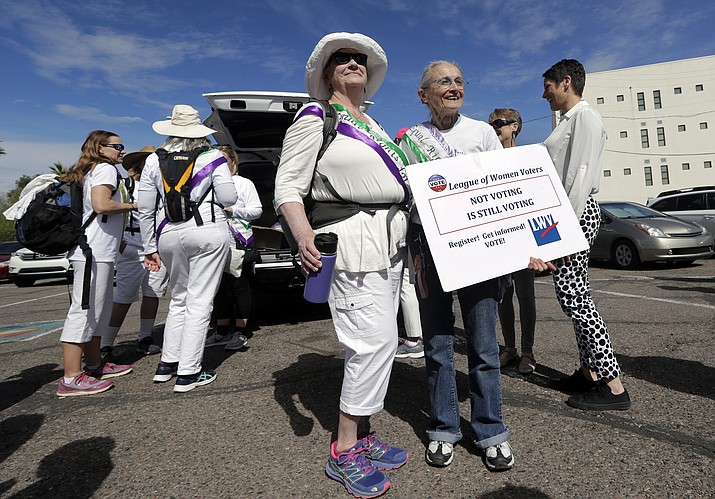 Demonstrators Molly Divine, left, and Rivko Knox pose for a photo before the start of a three-day march in support of ratification of the Equal Right Amendment (ERA) Monday, March 11, 2019, in Phoenix. (Elaine Thompson/AP, file)

PHOENIX - A bid by House Democrats to force a vote on the Equal Rights Amendment last week was sidelined by Republicans who claimed it is not only unnecessary but a scheme to enshrine abortion rights in the U.S. Constitution.

Rep. Pamela Powers Hannley, D-Tucson, demanded last week that a measure to ratify the proposed amendment be brought to the floor for a vote. The unusual motion became necessary because House Speaker Rusty Bowers refused to even assign her resolution for ratification to a committee for a hearing.

Hannley, however, was outmaneuvered by Majority Leader Warren Petersen, R-Gilbert, who proposed a substitute motion to table the issue. And each of the 31 Republicans in the 60-member chamber voted to support the alternative -- but not before more than an hour of floor speeches explaining the need or not for the ERA.

There also were questions about the claim that a vote would actually make Arizona the 38th state to ratify the amendment, first proposed by Congress in 1972, effectively putting it into the Constitution. Issues range from a time limit for ratification set by Congress having expired years ago to the fact that five states have rescinded their own ratification votes.

But much of the focus of those who voted to sideline a vote on the ERA involved the issue of abortion.

"This is their way of saying that abortion should be legal,'' said Rep. Michelle Udall, R-Mesa, about supporters. "No one should have the right to kill a child, an infant, a baby that has not been born.''

That claim did not go over well with ERA supporters watching from the gallery who responded with audible hisses. Speaker Pro-Tem T.J. Shope warned he would clear out spectators if they persisted.

Hannley said foes are looking for excuses, saying all the amendment does is guarantee that "equality of rights under the law shall not be denied or abridged by the United States or any state on account of sex.''

"You'll note that the ERA includes no mention of military service for women,'' she said.

"It includes no mention of gender-neutral bathrooms and no mention of abortion,'' Hannley said. "So let's dispense with those erroneous arguments from the 1970s and focus on what the ERA is really about.''

And that, she said, involves things like equal pay for equal work, citing figures show how much women of various races make in comparison to each dollar earned by men.

Udall said there already are laws prohibiting pay discrimination, saying any disparities could be based on the career choices made by women.

But that still left the underlying concern by ERA foes about what they say is the real agenda.

Rep. Nancy Barto, R-Phoenix, cited a 1998 ruling by the New Mexico Supreme Court, which struck down a law that state that prohibited the state from paying for abortions for Medicaid-eligible women except in certain limited circumstances. Calling pregnancy a "gender-linked condition,'' the justices cited that state's own Equal Rights Amendment to void the law.

Barto said there has been a similar ruling in Connecticut and that another case is pending in Pennsylvania.

"It really is all about abortion,'' she said.

And Petersen said he was voting to deny a debate on the ERA for "every single baby girl that was saved by a pro-life bill.''

Rep. Regina Cobb, R-Kingman, said the ERA suggests something that she does not believe: that women are not equal. Cobb said that has not been her experience.

But Rep. Randy Friese, D-Tucson, said that Republicans really did not want a full debate on the merits of the ERA, as shown by the unwillingness to give it a hearing where people actually could come to the Capitol and testify.

"If you feel some comfortable it won't pass, let it move through the process,'' he said.

This is actually the second bid this year to force a vote on the ERA. A similar effort to bring the issue to the Senate floor failed last month.