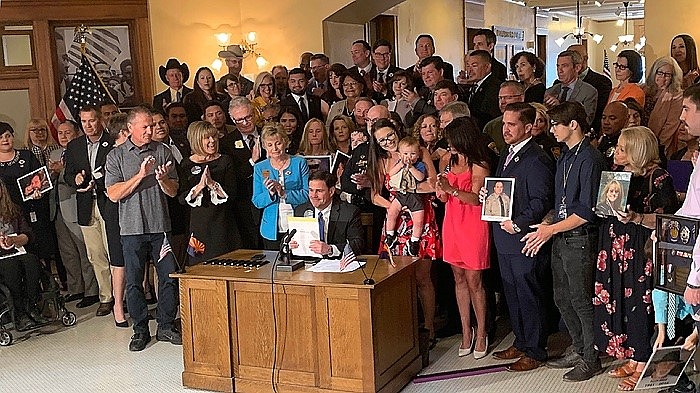 Surrounded by survivors of those killed by texting motorists, Gov. Doug Ducey signs a ban on texting while driving into law Monday, April 22, 2019, in Phoenix. (Coutesy)

PHOENIX — The Republican architect of the texting ban signed into law Monday by Gov. Doug Ducey said it could not have been done if a former Democrat senator had not paved the way.

What it also is is the 13th time similar legislation has been introduced. But all the dozen prior versions, many of them shepherded by Steve Farley, D-Tucson, ended up faltering.

Not this year. But Brophy McGee said it has nothing to do with the bill having a Republican sponsor.

“I give Steve every credit for having banged the drum for these years and finally got it into most of our thick skulls,’’ she told Capitol Media Services. In fact, Brophy McGee said that Farley, who did not seek reelection to the Senate last year to instead make an ill-fated bid for governor, was instrumental in lobbying to get this one over the finish line.

Farley, at Monday’s signing ceremony at the Capitol, said it isn’t about who gets credit.

“This is about making sure the victims’ families voices get heard and we can save lives on a roadway,’’ he said.

There have been victims and families in prior years.

But part of what pushed this one over the top was the death in January, just as lawmakers were convening, of Clayton Townsend. The officer from the Salt River Police Department, who was out of his vehicle talking to a motorist, was struck and killed by another driver who admitted to texting while behind the wheel.

“I would give the credit to Toni Townsend,’’ Ducey said, Clayton’s mother.

“I think everyone just saw this as such an avoidable death,’’ the governor said. “And when somebody comes down (to the Legislature) and speaks with the power and passion of a mom on behalf of her fallen son, how could they not deliver this to the governor’s desk?’’

Toni Townsend said she and the family actually celebrated approval of the bill the day before, on Easter Sunday, with the family going to the cemetery and sharing pictures.

“So it’s been a joyous couple of days,’’ she said, even if it came “out of some horrible tragedy.’’

“No good can ever come from that,’’ Townsend said. “But we can have a positive and we can at least have a legacy for Clayton.’’

She acknowledged that, strictly speaking, the statewide ban does not take effect for about 20 months. But Townsend said that, at least in the interim, “it’s all about changing behavior’’ by educating motorists to the specific problems of using a cell phone while driving.

Among those who was unaware of -- or ignored -- the hazards was the governor himself.

Ducey, who is now driven almost all the time by his security detail, confessed to his own practices before he took office in 2015.

“I’m sorry to say that I did,’’ he said, though it never resulted in an accident. Still, the governor said, that’s not the point.

“Now I know it’s not about being good about working your phone and driving, it’s that you shouldn’t be on your phone while driving,’’ Ducey said. “So my behavior will change as well.’’ 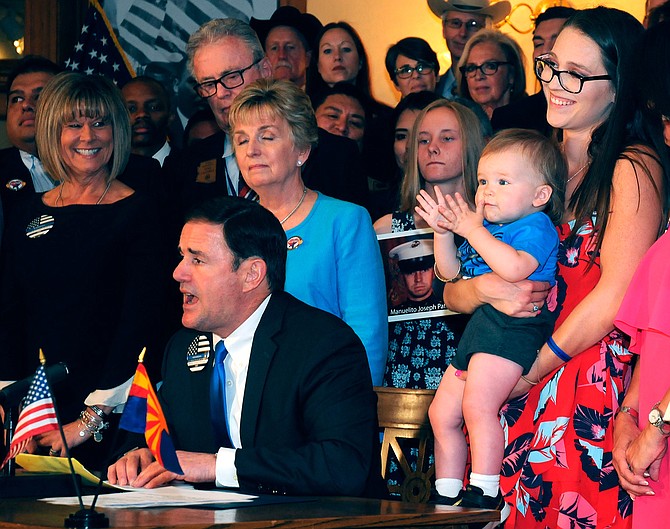 Gov. Doug Ducey wasn't done talking. But that didn't keep Braxton Townsend, son of killed Salt River police officer Clayton Townsend, from clapping in support of the bill on texting the governor was about to sign. Braxton was 10 months old when his father was killed by a texting driver. He is being held by Deanna, who is Clayton's widow. Clayton's mother, Toni, is at far left. (Capitol Media Services photo by Howard Fischer)