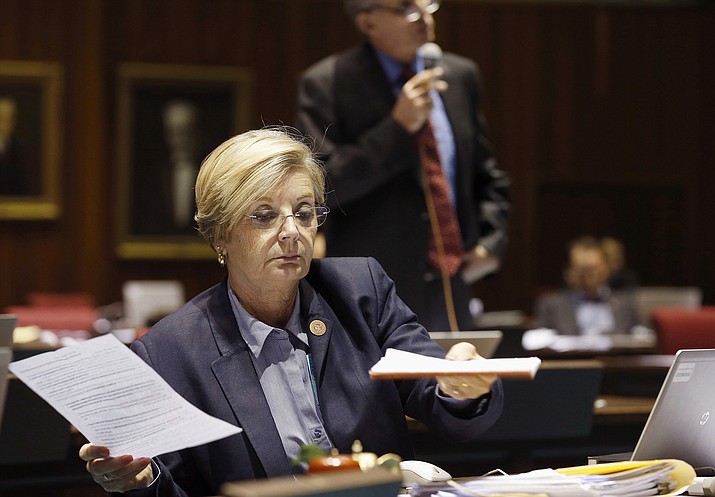 Senate President Karen Fann was praised by Yavapai County Board of Supervisors Chairman Randy Garrison for her leadership in championing a ban on hand-held cellphone use by motorists. (AP Photo/Ross D. Franklin, File)

Click photo to see related story: "Bill to outlaw ‘distracted driving’ also on governor’s desk." "There's people eating burritos who are swerving because they're trying to put sauce on their food," Rep. Travis Grantham said. "Anything can cause a distraction.”

Arizona lawmakers gave final approval Thursday, April 18, to a comprehensive statewide ban on the use of hand-held cellphones by motorists, sending the bill to Gov. Doug Ducey for his anticipated signature.

The 44-16 vote by the House on HB 2318 came after lawmakers defeated a version with many of the same restrictions but a crucial difference: It would have been a secondary offense, allowing police to cite offenders only if they were pulled over for some other reason.

“We are only one of three states in the entire nation that does not ban text messaging and driving even though we know the frightening statistics,” Rep. Noel Campbell, R-Prescott, told colleagues.

Campbell has been a champion of making texting while driving and the use of hand-held cell phone a primary offense, allowing police to stop motorists solely because they are breaking this new law.

And Campbell noted that Arizona cities and counties already have their own versions.

Yavapai County Board of Supervisors Chairman Randy Garrison is proud that legislators are following the lead of counties, cities and towns that have long championed the need for no hand-held devices and no texting while behind the wheel.

Like many other leaders in the area, Garrison suggested a statewide ban is a solid move toward saving people’s lives on the road. He offered a “shout out” to Senate President Karen Fann for her leadership in championing this cause.

“We’ve been supportive of moving forward with some sort of legislation for years now, and really pushing our legislators to take up the charge and do what they did today,” Garrison said Thursday afternoon.

The Board of Supervisors late last year enacted a countywide policy to ban distracted driving, a move followed by other counties as well as towns and cities — including those of the tri-city area.

Chino Valley Town Manager Cecilia Grittman said she is happy state lawmakers finally acted on it, “since we’ve all passed our own bans.”

Grittman added that the statewide ban is very similar to the one the town approved late this past fall.

“This action sends a strong and consistent message to drivers statewide about the dangers of texting and distracted driving. Our desire is for voluntary compliance for this and all related traffic safety laws,” Prescott Police Chief Debora Black said.

Prescott Mayor Greg Mengarelli said he was pleased with the Legislature’s approval of the ban. “It’s a good day for Arizona,” he said Thursday. “It will make our roads safer.”

Noting that Prescott has had a similar ban in effect for months, Mengarelli said it would be beneficial to have a statewide ban that would be consistent throughout the state. Although the state’s ban — if signed by the governor (he planned to do so Monday, April 22) — would not go into effect until 2021, the city would have the option of keeping its own law in effect in the meantime.

“It’s likely that we’ll leave it in place,” Mengarelli said of the city’s ban.

The Prescott City Council approved its ban of hand-held devices while driving in October 2018, and it went into effect in late November. For the first several weeks, the Police Department issued only warnings, and had the authority to begin ticketing on Jan. 1, 2019.

Since implementation, Mengarelli said the city has focused on getting the word out through media releases and street signs. “I think people are changing their habits,” he said.

Prescott Valley Police Chief Bryan Jarrell said the bill is similar to Prescott Valley’s with a few minor sections. “All in all, I think it’s a great thing. I’m glad the state finally moved to enact something like this.” He added he was puzzled why it took so long to happen since research has shown use of hand held cell phones is eight times more dangerous than drink driving.

Prescott Valley Mayor Kell Palguta also was supportive of the bill. “I think the bill in the legislature can prevent unnecessary accidents or injuries to people. It’s 100 percent worth it,” he said. “It can only improve the safety on our streets.”

Garrison believes legislators decided they would rather be in front of this charge instead of behind it.

“We want people to put their phones on their desk or in their cup holders. We want to get them out of their hands … and keep their eyes on the road,” Garrison said. “This is a great start, and a wakeup call to everybody on how important this is.”

Under the state law, which takes effect in 2021, a first-time offense would result in a fine of between $75 and $149; subsequent violations could lead to fines up to $250.

Approval would not have come except for the fact that all 29 Democrats supported the measure: Only 15 of the 31-member Republican caucus was in support.