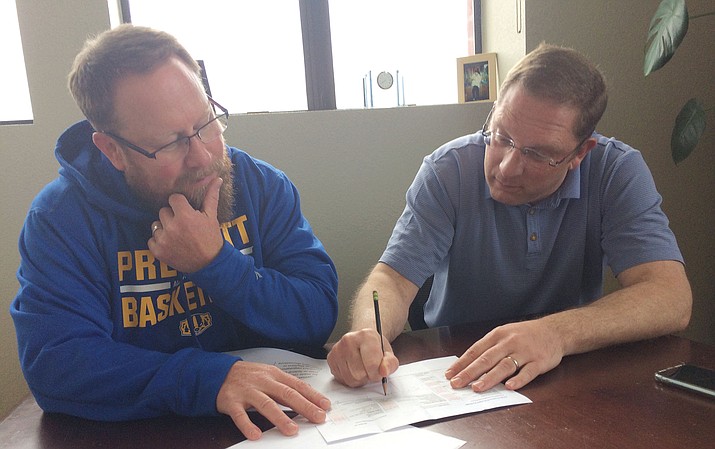 Here’s a math riddle the Prescott Unified School District would like to solve: how to find enough dollars to offer the highest-caliber education from the finest educational professionals despite annual drops in student enrollment often rooted in the inability for families to afford the higher cost of living here.

Add to those tricky calculations a state budget formula that requires districts to speculate on student numbers and then require mid-year budget cuts when calculations fall below predicted enrollment.

Even with the best budgeting game plan, district leaders say this is a hard-to-digest financial recipe.

“We are in no way adequately funded in the state of Arizona,” declared district Superintendent Joe Howard who this week said he is beyond tired of the state coming in last in the student funding race.

Howard has voiced his concerns to all the powers be, including Gov. Doug Ducey. And plans to keep doing so.

For Prescott, the reality this coming year is another year of declining enrollment, a far from enviable position for any district because it forces school and district-level administrators leaders to make very tough choices, declared Howard and Chief Financial Officer Brian Moore.

On April 2, the Prescott Unified School District Governing Board approved a proposed 2019-2020 budget of just over $27 million, about $2 million more than the current year’s budget. A final budget vote that will include the proposed tax rate for local residents will occur in June before the state’s July deadline.

The trickiest part of the current-year budgeting requirement is making accurate enrollment calculations — the district estimates a 145-student drop between this year and the 100th day of the 2019-20 school year — there could be mid-year changes that require the district to give back money, or absorb students after the 100th day with no state reimbursement. The state per-pupil cost is about $5,000.

In this school year, the Governing Board was required to revise its budget by $800,000. The district’s reserve account was tapped to cover the costs or mid-year staff and program cuts would have occurred.

With a more traditional funding formula, one rooted in prior year’s enrollment figures, the budget would be a more exact document, and district leaders would not be in constant scramble mode, Moore said.

The district priority over the past several years has been focused on ensuring competitive salaries for all faculty and staff. For the next school year, that means a 5 percent increase for returning teachers and 2 percent for all other positions.

The other priority is class sizes — an average of 24 in kindergarten up to 35 in high school classrooms.

To cover those increased expenses, the board entrusted district administrators to find $700,000 in cost reductions.

Howard and Moore say the cutbacks this year are nowhere near as severe as they have been in prior years — in 2015 the district was forced to close two schools and over the last decade has lost some 350 staffing positions.

The plan for the coming year is to cut nine teaching and three staff positions, as well as reduce instructional coaches from 4.5 positions to 3.5 positions shared between six schools. All of those are expected to be absorbed by attrition or staff reassignment rather than a layoff.

This budget, though, will require at least one program change — and that relates to altering library operations at both the middle and high schools. How that will exactly look is not yet known

Against all these odds, though, Howard and fellow leaders boast of educators who continue to go above and beyond to make connections with students that will reverberate throughout their lives.

The #RedForEd movement last year pushed lawmakers to make a significant financial pledge to hike teacher salaries to more competitive levels over the next few years. And it has paid off.

Yet the fight to propel education into a first place priority in communities across this state is far from over.

On a local level, Howard wants more people to know Prescott’s story, to see it as a place not just for retirees but for families.

He implores state leaders to invest more in its most precious resource — the children of tomorrow.

He analogized Arizona’s public education system to the kangaroo rat. These desert rodents are so efficient with the water they ingest they excrete almost no waste.

“We’re doing incredible work,” Howard said. “Just imagine if you gave us some water how much better we could do for kids.”