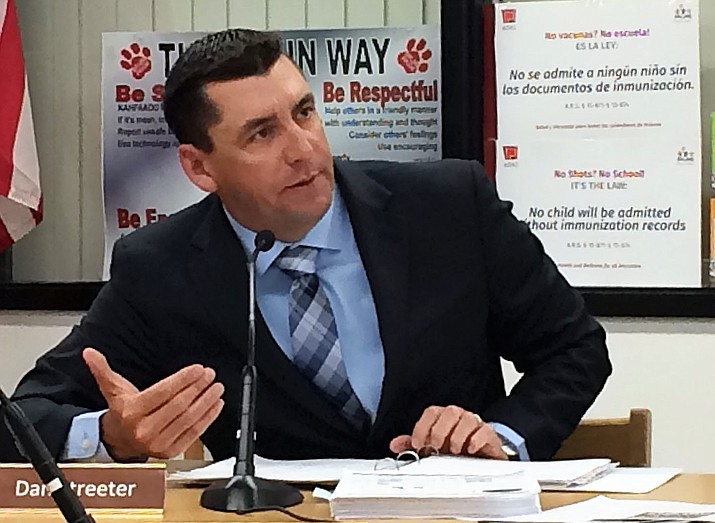 The work doesn’t stop and the challenges are great, Humboldt Unified School District (HUSD) Superintendent Dan Streeter said at the April 9 governing board meeting where he gave a budget update to board members.

Declining enrollment, the minimum wage increase, increases in health insurance costs and state retirement contributions have resulted in a need to trim the district’s budget by $500,000. The legislative change to current year funding also creates a strain on districts when unknown factors at the beginning of the school year contribute to difficult mid-year budget modifications.

“We can handle mid-year adjustments … until we can’t,” Streeter said.

Extra revenue, such as from Gov. Doug Ducey’s 20-by-2020 Plan, and inflation dollars are welcomed. The challenge comes because the state budget schedule differs from school districts’ filing requirements and issuance of contracts.

Humboldt’s three-year strategy has helped with its financial planning. It includes plans to cut this year’s budget by $500,000, and by $400,000 the following two years.

“With the caveat that if we continue to lose enrollment and we experience increases in health insurance, we’ll have to prepare for that,” Streeter told board members.

District directors looked at how to manage next year’s proposed budget decline without impacting students or programs. Changes could include:

• Not filling the Chief Academic Officer position, which means directors will be shouldering those duties.

• Exploring savings in the budget for supplies.

• Consolidating some bus routes and looking at transportation’s operational budget.

• Staff reduction through attrition only.

Humboldt is in the fifth percentile of the state based on the Arizona Equalization Formula, which funds students based on a district’s property tax and the state’s general fund. Humboldt’s funding is equally balanced between the two. Other districts, such as Prescott, are fully funded through property tax, Streeter said. In addition, many districts are able to tap other sources of funding.

“A lot of districts rely on funding through bonds and overrides. We weren’t able to,” Streeter said about the $15 million bond district voters turned down in 2018. “Because we do not have an override or bond, we’re starting to fall further and further to the bottom of the pile.”

The previous bond, approved by voters in 2006, was for capital projects and placed the district in a good position during the recession. The proceeds of that bond are now gone and the district is beginning to see the impact, he said.

Tax credit money this year totaled $250,000, which sounds great, said Vice President Rich Adler. However, not everyone in the community can afford to give $400. And state legislators are discussing the elimination of tax credits for next year, he added.

“The decrease in enrollment is brutally difficult for districts like ours to handle,” Adler said.

The district continues to move forward with student achievement and its successful, innovative programs.

“I think this community is incredibly fortunate to have this group of principals,” Streeter said. “Providing a world-class education doesn’t stop.”