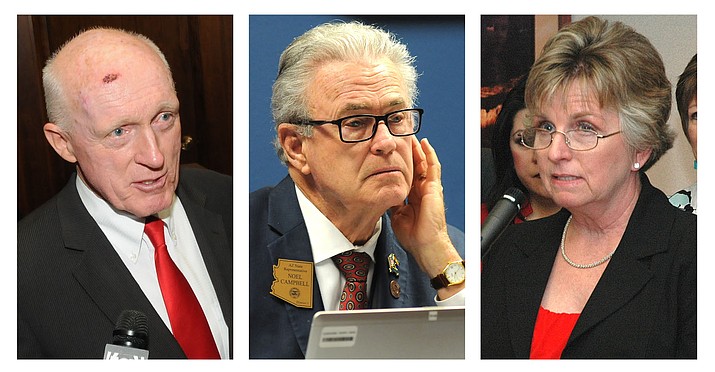 PHOENIX -- Arizona is on the verge of no longer being just one of three states without a comprehensive ban on texting while driving.

House Speaker Rusty Bowers said Wednesday he will allow a vote Thursday on a Senate-passed measure banning not just texting but also any hand-held use of electronic devices like cellphone.

The move comes despite the objections of some House Republicans who are opposed to what they see as unnecessary regulation. There also are questions of whether the simple fact of using a cellphone should subject someone to a fine if there is no evidence it is affecting their driving.

But Bowers effectively acknowledged that many, if not most, of the 29 House Democrats favor the measure. And that is likely to provide the necessary margin for final approval even if a majority of the 31 Republicans vote "no.''

The Senate already has approved the identical language in House Bill 2318. A final vote would send the measure to Gov. Doug Ducey who already has said he would sign it.

More than two dozen cities and counties already have adopted their own version of a texting ban, including Yavapai County and the Quad Cities. If approved, however, a new state law would pre-empt and replace anything more comprehensive.

That is significant, as the legislation would allow people to text and make phone calls while a vehicle is stopped at a red light or railroad crossing. Many of the local laws have no such exception.

And the penalties would have to conform with state law: A fine of between $75 and $149 for a first offense, with subsequent violations subjecting the motorist to fines up to $250.

And there is something else: HB 2318 would not take effect until 2022, with police allowed to issue only warnings until then.

In the interim, though, cities and counties could continue to enforce their own local laws and even enact new ones that mirror HB 2318 and start writing tickets right away. Only the statewide law would remain unenforceable until 2022.

The deal struck Wednesday among Republicans requires that two competing measures also get a vote Thursday.

Senate Bill 1165 is similar to HB 2318 but with a twist: It would be amended on the House floor to allow for only secondary enforcement. That means police could not stop someone solely for use of a cellphone and could ticket motorists only if they are pulled over for some other reason.

It would allow police to stop and ticket a motorist who was doing something unrelated to driving if it creates an "immediate hazard'' or the person does not exercise "reasonable control'' of the vehicle. That would cover not just the use of cellphone but anything else, like tuning the radio or even yelling at the kids in the back seat.

But under his bill, the simple act of doing any of those things, including texting while behind the wheel, would not be a violation without some specific effect on a motorist's driving.

"That bill doesn't have solid support in our caucus,'' said Rep. Noel Campbell, R-Prescott, of Mesnard's plan, calling it "very vague.'' Campbell is the prime sponsor of HB 2318 using language he worked out with Sen. Kate Brophy McGee.

But even if Mesnard's bill does get approved and is signed by Ducey, both could take effect: Nothing in the measure conflicts with HB 2318

All three could end up passing.

"I like all three,'' Bowers told Capitol Media Services.

The speaker said he supports primary enforcement, allowing police to stop motorists solely because they are using a hand-held cellphone. But Bowers said he will take what he can get.

Campbell said he wants HB 2318 with its primary enforcement He said that mirrors what already is in most local laws.

He also is counting on something else to get the necessary 31 votes on Thursday: increased public pressure on Arizona to join the 47 other states and the District of Columbia that already have comprehensive texting bans.

Those efforts got a renewed push following a series of fatalities caused by those who were texting. Most recently that includes Clayton Townsend, a five-year veteran of the Salt River Police Department who was struck and killed in January by a driver who admitted to texting at the time.

Campbell acknowledged the opposition some lawmakers from his own Republican party expressed during Wednesday's closed-door caucus. But he is counting on some of the foes coming around by Thursday.

"It's easy to kind of be reticent right now and hold back,'' he said. "But when push comes to shove and you have to vote on the bill, I think they'll look at that and decide.''

If the bill gets final approval it will mark the end of efforts going back more than a decade to have Arizona join the other states that already have such bans. Prior bills have been sidelined, often by a single foe like Andy Biggs who, as Senate president, assigned the proposal to multiple committees to ensure that it would never get to the floor.

Several things aligned this year. That includes changes in Republican leadership, with both Bowers as House speaker and Karen Fann as Senate president in favor of restriction.

Fann agreed to allow a vote on HB 2318 even though all 10 votes in opposition came from among the 17 Senate Republicans. She said having a statewide statute controlling the issue, rather than a patchwork of local laws, will ensure that all motorists know what is and is not legal, no matter where they are driving.

Arizona actually does have a texting and cellphone ban of sorts on the books. But that measure, which took effect last year, applies to those with a learner's permit. That restriction also extends to the first six months that someone has a Class G license, which is reserved for the newest drivers.