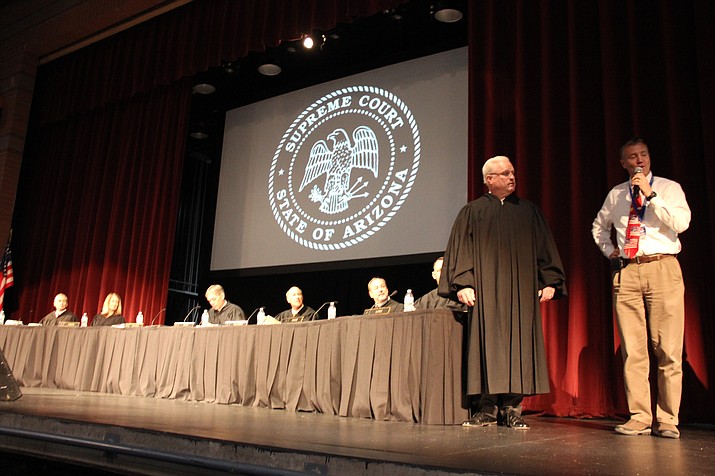 Arizona Supreme Court justices watch as one of their own, Vice Chief Justice Robert Brutinel, is honored by Prescott High School officials during a Supreme Court visit to Prescott on Tuesday, April 16. (Max Efrein/Courier)

Two cases were presented to the justices for consideration. The opposing attorneys for both cases had 20 minutes each to argue their positions, during which the justices rapidly grilled them on the soundness of their arguments and why such cases should or should not go before the Arizona Supreme Court.

Unlike other court judges, the Supreme Court’s justices get to choose most of their cases. The only exceptions are for capital punishment cases – any case in which the death penalty is given – and election-related cases, such as when someone is trying to disqualify a candidate or ballot measure.

“We hear arguments for about 50 cases a year,” said Arizona Supreme Court Justice Clint Bolick. “People bring us over 1,000 cases they would like for us to consider. We choose most of the cases that we will consider based on the importance of the case to the state or the confusion in the law that we need to try our best to resolve.”

Most oral arguments are held in the Supreme Court courtroom at the Arizona State Courts Building. But since 1994, the court has made it a mission to hear at least a few of them outside the Phoenix metropolitan area every year.

These “oral argument on the road” programs are open to the public and often attended by many high school- and college-level students whose civics and other related classes incorporate the field trip into their curriculum. About 600 such individuals from throughout the quad-cities attended Tuesday’s program and were allowed to ask the justices questions about what they do, said Clark Tenney, assistant principal at PHS.

“Some kids may have seen this and said ‘I have no idea what just happened,’ but others might be intrigued and find themselves doing something like what Vice Chief Justice Brutinel has done,” Tenney said.

Arizona Supreme Court’s first oral argument on the road was held in 1994 at Prescott High School. It has since been back to the quad-city area three times, including Tuesday’s visit. This was the first time, however, that one of the court’s justices was a PHS alum. Vice Chief Justice Robert Brutinel grew up in Prescott, graduating from PHS in 1976.

As the story goes, Brutinel’s interest in law was first cultivated while attending the high school. He was a linemen for the school’s football team before breaking his neck. Rather than sit around and feel sorry for himself, he devoted his time to studying for his classes and reading law books.

He eventually became an attorney and then a judge in Yavapai County before being appointed to the state’s Supreme Court in 2010. This coming July 1, he begins a five-year term as the court’s chief justice, a position sometimes referred to as the “first among equals.”

In honor of his accomplishments, PHS officials gifted him a customized tee-shirt after Tuesday’s oral arguments. On the back of the shirt is printed his name and his player number from when he was on the school’s football team.

“I truly appreciate that and am very honored to be back at Prescott High School,” Brutinel said after accepting the gift. “But I have to be perfectly honest with you, I was never that good at football.”