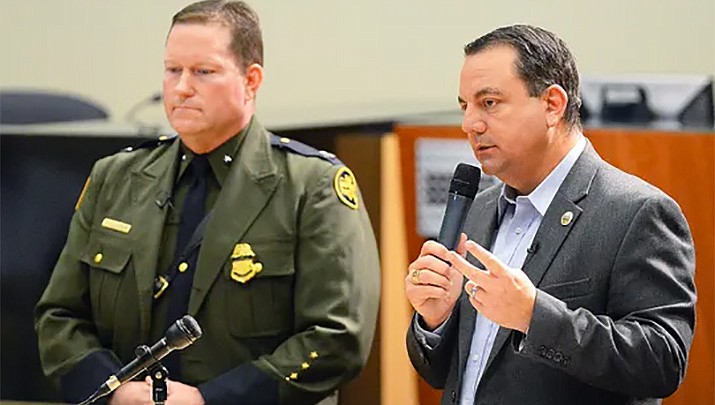 In this March 28, 2019 file photo, Yuma Mayor Doug Nicholls (right) answers a question during a news conference inside Yuma City Council Chambers about the current humanitarian crisis in the border region, due to high volumes of illegal migrant crossings in Yuma. U.S. Border Patrol Deputy Chief Patrol Agent for the Yuma sector, Carl Landrum, is on the left. (Randy Hoeft/Associated Press)

YUMA, Ariz. — Yuma Mayor Douglas Nicholls has declared a state of emergency to deal with the number of families being released from Border Patrol custody into the city.

Nicholls said Tuesday that he hoped not to get to this point but that organizations helping immigrant families just don't have capacity to deal with so many.

The mayor is calling on the federal government to send resources, suggesting a FEMA response. The city's emergency shelter can hold 150 people but had about 200 on Tuesday and was expecting more, Nicholls said.

Border cities have seen a large number of immigrant families from Central America being dropped off by immigration authorities who don't have the resources to process them.

The Border Patrol is on pace to apprehend a million immigrants this fiscal year.