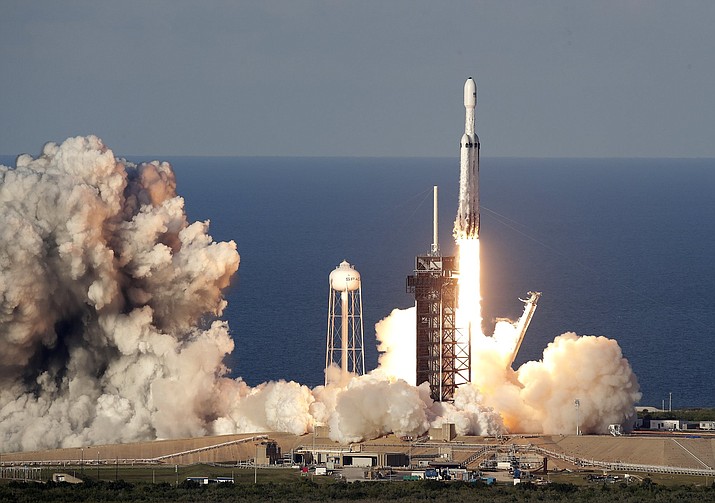 CAPE CANAVERAL, Fla. — SpaceX launched its second supersized rocket and for the first time landed all three boosters Thursday, a year after sending up a sports car on the initial test flight.

The new and improved Falcon Heavy thundered into the early evening sky with a communication satellite called Arabsat, the rocket's first paying customer. The Falcon Heavy is the most powerful rocket in use today, with 27 engines firing at liftoff — nine per booster.

Eight minutes after liftoff, SpaceX landed two of the first-stage boosters back at Cape Canaveral, side by side, just like it did for the rocket's debut last year. The core booster landed two minutes later on an ocean platform hundreds of miles offshore. That's the only part of the first mission that missed.

"What an amazing day," a SpaceX flight commentator exclaimed. "Three for three boosters today on Falcon Heavy, what an amazing accomplishment."

The Falcon Heavy soared from NASA's Kennedy Space Center, using the same pad that shot Apollo astronauts to the moon a half-century ago and later space shuttle crews.

Nearby beaches and other prime viewing spots were packed with tourists and locals eager to catch not just the launch but the rare and dramatic return of twin boosters, accompanied by sonic booms. The roads were also jammed for Wednesday night's launch attempt, which was scuttled by high wind. 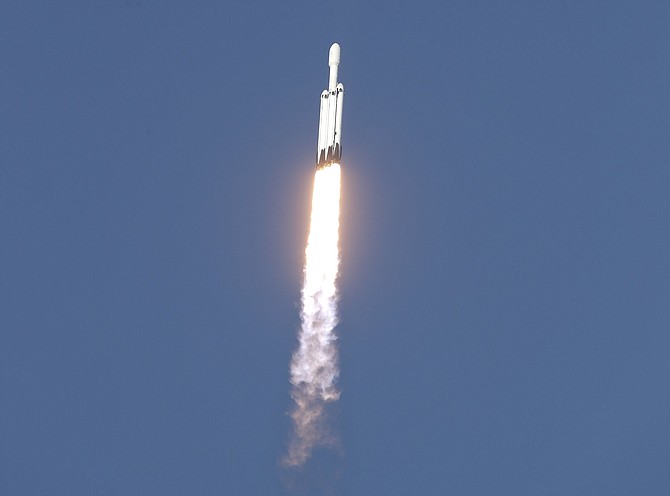 Because this was an upgraded version of the rocket with unproven changes, SpaceX chief Elon Musk cautioned in advance things might go wrong. But everything went exceedingly well and the satellite ended up in the proper orbit. SpaceX employees at company headquarters in Southern California cheered every launch milestone and especially the three touchdowns.

"The Falcons have landed," Musk said in a tweet that included pictures of all three boosters.

Musk put his own Tesla convertible on last year's demo. The red Roadster — with a mannequin, dubbed Starman, likely still at the wheel — remains in a solar orbit stretching just past Mars.

The Roadster is thought to be on the other side of the sun from us right now, about three-quarters of the way around its first solar orbit, said Jon Giorgini, a senior analyst at NASA's Jet Propulsion Laboratory in Pasadena, California.

A couple dozen ground telescopes kept tabs on the car during its first several days in space, but it gradually faded from view as it headed out toward the orbit of Mars, Giorgini noted.

The Roadster could still look much the same as it did for the Feb. 6, 2018, launch, just not as shiny with perhaps some chips and flakes from the extreme temperature swings, according to Giorgini. It will take decades if not centuries for solar radiation to cause it to decompose, he said.

SpaceX plans to launch its next Falcon Heavy later this year on a mission for the U.S. Air Force. The boosters for that flight may be recycled from this one. 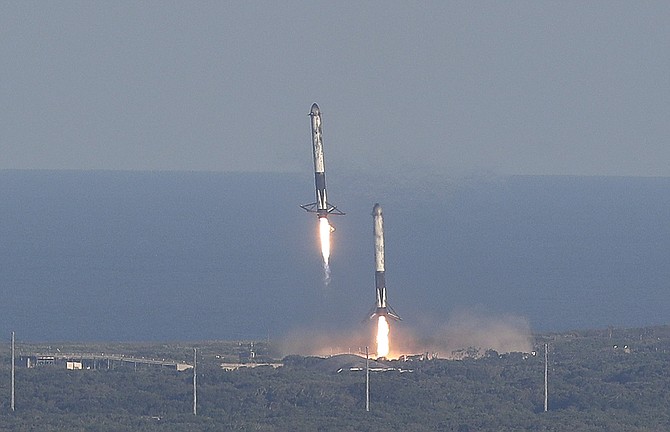 Eight minutes after liftoff, SpaceX lands two of the first-stage boosters side by side at the Kennedy Space Center in Cape Canaveral, Fla., Thursday, April 11, 2019. (AP Photo/John Raoux)

NASA Administrator Jim Bridenstine last month suggested possibly using a Falcon Heavy — and another company's big rocket — to get the space agency's Orion capsule around the moon, minus a crew, in 2020. But the preferred method remains NASA's own Space Launch System mega rocket — if it can be ready by then.

Bridenstine said everything is on the space table as NASA strives to meet the White House's goal of landing astronauts back on the moon by 2024.

NASA's Saturn V rockets, used for the Apollo moon shots, are the all-time launch leaders so far in size and might.

Until SpaceX came along, boosters were discarded in the ocean after satellite launches. The company is intent on driving down launch costs by recycling rocket parts.