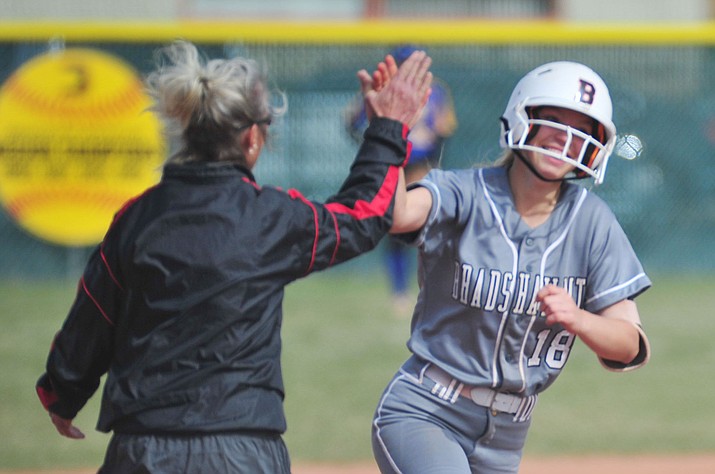 Not only is she the 2019 team’s lone senior, she is the captain of a Bears squad that is ranked No. 4 in 4A and has a legitimate shot to win a Grand Canyon region championship and forge a long run in the state playoffs.

Oh, and did we mention that Dilcher’s walk-off single in the sixth inning propelled Bradshaw Mountain to a 10-0 run-ruled victory over rival Prescott on Thursday, April 11, in the Bears’ regular-season home finale?

Yes, it was quite a day for Dilcher and the Bears, who convincingly swept their annual two-game region series from the Badgers.

“It felt really good,” Dilcher said of hitting the walk-off, a blooper into shallow left field. “I kind of struggled throughout the game with my hits [1 for 4, three RBIs]. So to come up and just not think about anything and hit the ball and getting success from it is obviously the ultimate goal.”

Bears coach Sharon Haese recalled that this spring is only the second full season Dilcher has played. She suffered season-ending injuries in her other two years.

“It was just so fitting to see her get that walk-off hit, and I was so happy for her,” Haese added. “She has given the program so much. She’s enthusiastic and she’s a great leader.”

With Thursday’s victory, Bradshaw Mountain extended its winning streak to seven games. The Bears have won their last six by shutout, and they improved to 14-1 in power-point games and 9-1 in the Grand Canyon region.

They stayed in first place in region, maintaining their one-game lead over Mingus (8-2). Bradshaw Mountain hasn’t lost since March 26, a 3-2 setback to Mingus in Cottonwood.

Prescott, meanwhile, has struggled. The Badgers have lost seven in a row, dipping to 3-11 and 0-9 in region.

On Thursday, Bears starting pitcher Caitlynn Neal tossed a three-hit shutout, striking out 10 and issuing two walks. At the plate, Bradshaw Mountain was loose and swinging freely. Neal was 3 for 4 with an RBI double and two runs scored.

“This was a great morale win,” said Outlaw, adding that the team played for Dilcher this week. “A lot of the girls really needed this win – not just mechanically. Playing your rival really gets your blood pumping, and everybody needed that energy. It brings us closer to have a week like that.”

Bradshaw Mountain led 9-0 through the fourth inning, scoring three runs in the first, one in the third, five in the fifth and one in the sixth on Dilcher’s RBI single with runners on the corners and one out.

“We definitely put in our hardest effort – Bradshaw’s a very good team and defensively we really showed what we’ve got,” Prescott senior Tessa Eppele said. “Caitlynn is a very good pitcher. We haven’t seen pitching that fast all season. We definitely tried to stay back and make contact with the ball.”

In these teams’ first game on Tuesday, Bradshaw Mountain won 12-0, as Bears starting pitcher Hambrick tossed a five-hit shutout, notching 17 strikeouts and issuing no walks. Neal (3 for 4, two doubles), Duryea (2 for 4, homer, three RBIs), Hambrick (2 for 3, RBI) and Outlaw (2 for 4, RBI) sparkled at the dish.

The Bears conclude their regular season at 3:45 p.m. Thursday, April 18, at non-region opponent and 4A No. 13 Desert Edge in Goodyear.

“We don’t have any more ‘give-me games,’ ” Dilcher said. “We’re going to have to work for everything we want, and everything that we have put in to the field is going to be tested.”

Prescott has four games left, including two at home and a pair on the road. First up, the Badgers play host to non-region foe and 4A No. 15 Saguaro (10-3) at 3 p.m. Friday, April 12, at their campus field.

“These girls mean a lot to me, and I really want to finish out this season having a lot of fun,” Eppele said.