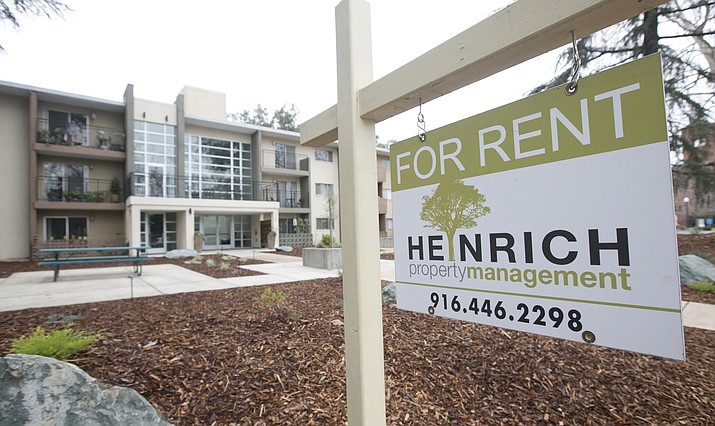 This Jan. 8, 2017, file photo shows a "For Rent" sign outside an apartment building in Sacramento, Calif. The growth in apartment rents is accelerating this year, fueled by increasing demand amid strong job growth, rising wages and more millennials seeking to move out on their own. (Rich Pedroncelli/AP, File)

It's a great time to be a landlord in America, not so much if you're a renter.

Apartment rents are continuing to rise this year, fueled by higher demand from millennials looking for a place of their own, strong job growth and rising wages.

The U.S. median rent climbed 3.4 percent in March from a year earlier to $1,535, according to data from online rental housing portal HotPads.

While apartment construction surged in the years after the housing bust, it hasn't kept up with demand, giving landlords the upper hand. Years of rising home prices, meanwhile, have made it more difficult for many would-be homebuyers to save up for a down payment.

"Even though mortgage rates are sliding a little bit and are lower than the historical average, you still have a huge amount of people who are not able to afford homes right now," said Joshua Clark, an economist at HotPads. "That's keeping people renting and that's going to keep people competing against each other for the same units."

The national median rent has risen annually since at least December 2012, the earliest data available from HotPads.

That trend has developed against the backdrop of a steady increase in rental households and a sharp decline in the homeownership rate for much of the past two decades.

The number of renter-occupied U.S. housing units climbed from a low of around 32.9 million in 2004 to a high of about 44.08 million in 2016. It's been mostly flat ever since, reaching around 43.11 million at the end of last year, according to Census data.

At the same time, the nation's homeownership rate has tumbled from a high of 69 percent in 2004. It bottomed out at 63.4 percent in 2016 and has since crept higher, reaching 64.4 percent last year.

HotPads' March report shows rents are rising in all of the nation's top 50 most populous metropolitan areas.

Phoenix notched the biggest gain, with its median rent vaulting 6.7 percent from a year earlier to $1,520. On the opposite end of the scale, the median rent in Houston rose just 1.3 percent in March to $1,585. New York's median rent also rose slightly, increasing 1.5 percent to $2,380.

Steady job growth and demographic trends, namely more of the younger millennials coming of age and seeking to move out on their own, are expected to continue to drive more demand for rental housing, pushing rents higher.

"What I'm confident about right now is that over the next few months we're going to see rents continue to rise," Clark said. "The fact that we have been accelerating in these winter months a little bit, that's a really strong signal that we're going to have higher rent appreciation this year than last year."

Millennial Money: Make renting work for your financial goals
Goal of owning home still strong, and 8 other housing trends
Letter to the editor: Rental market woes
Homeownership still the American Dream for most millennials, despite obstacles
When renting, good credit can open doors