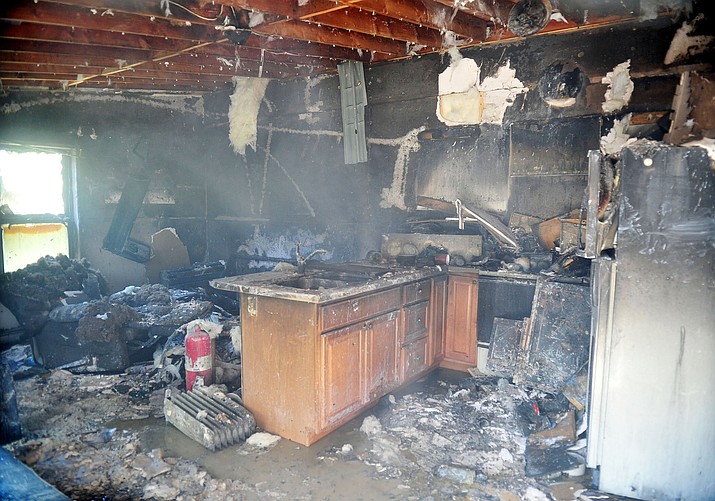 An early morning fire Wednesday, April 10, caused extensive damage to the interior of a home in the 1500 block of Butterfield Road. (Les Stukenberg/Courier)

A Prescott home’s interior was ravaged by fire Wednesday morning, April 10, but the building may be salvageable, according to fire officials.

Prescott Fire Department and Central Arizona Fire and Medical Authority (CAFMA) responded to the fire in the 1500 block of East Butterfield Road at about 9:45 a.m.

As crews arrived, they found heavy smoke coming from a 1,100-square-foot single-family residence with an attached garage and carport.

Three people were home at the time and all made it out safely, CAFMA Fire Marshall Rick Chase said.

Fire investigators believe the flames started in the living room, but the exact cause has yet to be determined.

The interior of the home and the contents suffered the most damage, Chase said.

“Some structural damage occurred, but the home may not be a total loss,” he said.

Items in the garage and carport were undamaged.

“Crews did a great job at keeping the fire from getting into nearby trees and vegetation, especially with the high winds we were experiencing today,” Chase said.

The Yavapai County Sheriff’s Office, Arizona Public Service and Lifeline Ambulance were also on the scene.