Suit targets California’s ban on ‘Come on You Whites’ plate 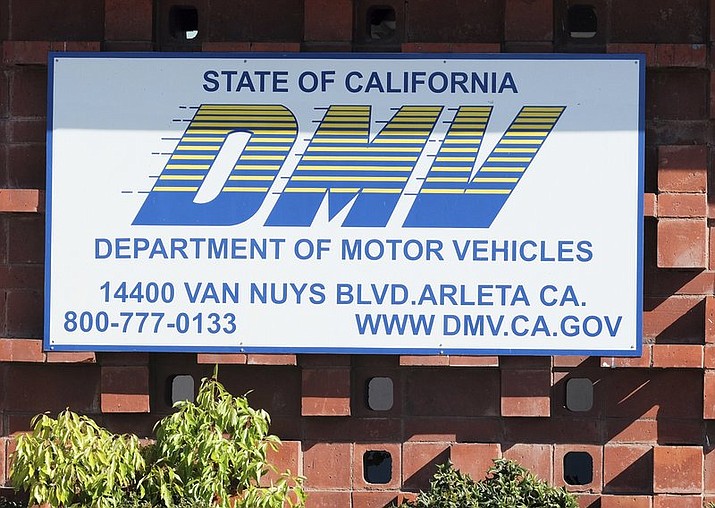 The California Department of Motor Vehicles office in the Arleta neighborhood of Los Angeles is seen Tuesday, April 9, 2019. A soccer fan claims in a lawsuit that the California DMV violated his First Amendment rights by rejecting a personalized license plate he said would celebrate his favorite team, but which the DMV said might be deemed offensive. The lawsuit says Jon Kotler applied for a plate that would read COYW, an abbreviation of "Come on You Whites," a slogan used by fans of London-based Fulham Football Club, referring to their signature white shirts. (AP Photo/Richard Vogel)

LOS ANGELES — A soccer fan says in a lawsuit that the California Department of Motor Vehicles violated his First Amendment rights by rejecting a personalized license plate he said would celebrate his favorite team, but which the DMV determined might be deemed offensive.

Jon Kotler applied for a plate that would read “COYW,” an acronym of the slogan “Come on You Whites” used by supporters of London-based Fulham Football Club, according to the federal lawsuit filed in Los Angeles on Tuesday. Fulham players wear white jerseys.

In denying the proposed plate, the DMV said the abbreviation could “have racial overtones” and carry “connotations offensive to good taste and decency,” according to the court filing.

The department’s rejection of the application violated his right to freedom of speech, said Kotler, a lawyer and constitutional scholar at the University of Southern California Annenberg School for Communication and Journalism.

The Department of Motor Vehicles said Tuesday that it does not comment on pending lawsuits.

Kotler’s suit asks the court to declare the Department of Motor Vehicles’ criteria for personalized license plates unconstitutional. He also wants the department to pay his court costs.

“You can’t allow bureaucrats to make decisions that are fundamental to what it means to be an American, and our free speech is one of those things,” Kotler said in a news release. “When the government starts to infringe on our rights, that’s when the individual citizen must speak up.”

In its rejection letter to Kotler, the Department of Motor Vehicles acknowledged the difficulties in balancing “an individual’s constitutional right to free speech and expression while protecting the sensibilities of all segments of our population.”

In a 1973 case, the California Court of Appeals upheld the Department of Motor Vehicles’ standard of “good taste and decency” in rejecting a plaintiff’s claim that his free speech was violated when the department rejected his requested license plate, “EZ LAY.”

“It appears in this case that the government has engaged in regrettable censorship of Mr. Kotler’s speech,” said Hudson, who teaches at Tennessee’s Belmont University and is a fellow at the Freedom Forum Institute. “To me courts should be very sensitive to viewpoint discrimination and should err on the side of protecting the individual’s speech from government censorship.”

Kotler is being represented pro bono by the libertarian-leaning nonprofit Pacific Legal Foundation. The group criticized the Department of Motor Vehicles’ “attempt to make itself the speech police” in a statement announcing the lawsuit.

“You can call Jon a sports fan or a First Amendment expert, but the DMV’s misguided efforts to regulate license plates have misbranded Jon as a racist,” the foundation said.