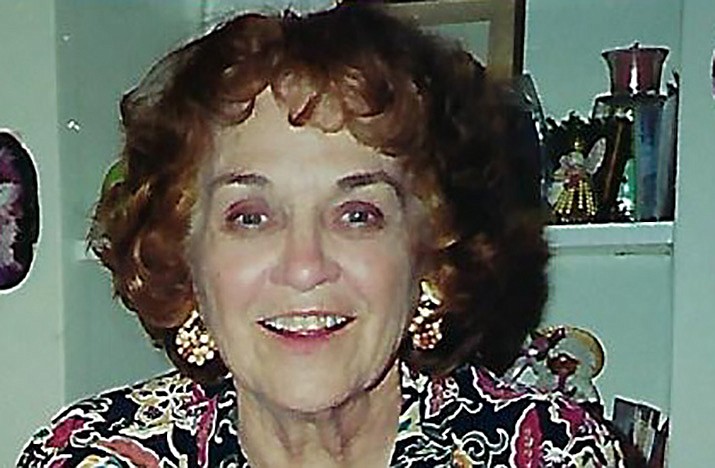 Jane H. Jones (Jane Adeline Hobbs) was born the eldest daughter of two, to Cyrus A. Hobbs and Eva Marie Hobbs (Brant) of Chester, West Virginia, on Sept. 11, 1920. Six months ahead of her 99th year, she peacefully passed away to be with our Lord Jesus Christ on April 3, 2019.

The most wonderfully loving Mother, she was a cheerful, friendly, kind, considerate and respectful soul. In all her giving, forgiving, caring and loving ways, she touched the lives of the many who knew her. Faithful, to our Lord Jesus Christ, her entire life, she was a ‘Spirit-Filled’ Christian, Child of the Living God, and Holy Spirit; she was a blessing to all she met along her life’s path.

Arriving in Prescott, Arizona, from Newell Heights, West Virginia, in June of 1960, with our father, two sons, ages 7 and 8, and their grandmother, she lived and worked in Prescott for the remainder of her life. While in Chester, she and our father owned and operated a drive-in restaurant, which they eventually closed and replaced with a china shop (in the same location, at the top of the hill, on Route 30, just south, out of Chester). Upon relocating to Prescott, she worked as a clerk, in the early ‘60s for the Yavapai County Assessor’s Department during the “Joel Baldwin” administration. Upon leaving the Assessor’s Department, in approximately 1965, she started an “at home” day-care service so she could be more involved in the raising of her sons, then in 7th and 8th grade. Returning to the County in 1967, she was one, of an original group of three persons, who opened the Yavapai County Planning & Zoning Department (now known as Yavapai County Development Services); being, at the time, the Administrative Assistant to the first, then acting Director, Bruce Evans. Years later she became the Department’s Historian under the Directorship of Steven Mauk, and finally retired in 2011 just two months shy of her 90th birthday, having worked a total of 49 years for the County.

While working full time, as a single mom, she faithfully tithed and attended church regularly and was instrumental in both of her sons’ salvation, raising them to become Christian men. Being the Salutatorian of her High School graduating class, she was also the Assistant Band Director and an English honor student. She loved music and loved to sing. Able to sing in three octaves (tenor, soprano and alto), she had a perfect ear for singing harmony. She, too, had been invited to sing with the local chapter of the Sweet Adelines. In addition to her love of music, she enjoyed dancing, ice skating and roller skating. And never losing her ardent passion in the caring for her sons, it was known by many that she often said, “I love my two boys.” At 92, she prepared her last and exquisite Thanksgiving Dinner, turning the yearly event over to them.

Preceded in death by both parents, Cyrus A. and Eva Marie Hobbs; and her younger sister, June (both mother and sibling having passed when Jane was but 5 years old). She is survived by her two sons and four grandsons, Neal K. Jones of Prescott and his son Michael Jones (wife Jessica), Noel Z. Jones of Prescott and his three sons, Jonathan, Nicholas (Nick) and Morgan; sister, Anita Dawn Kukich (husband Martin) of East Liverpool, Ohio, with nephews, Marty (wife Kristine) and Mathew; nieces, Anne (husband Mike) and Dawn; brothers, Charles (Charlie) Hobbs and Gayle Hobbs (wife Josephine), of Chester, West Virginia, with nephew, Jason and nieces, Joanna (husband Chuck), Julie (husband Brian) and Jenny; and her Blessed Life Long Friend, Martha (Mart) Bond, of State College, Pennsylvania. Until we meet “at Heaven’s Gate,” our unending blessings to you, most dear one - Mom, you are greatly missed! We’ll see you in the Morning! Love you forever and ever! Burial will be on Thursday, April 11, 2019, at 11 a.m., in the Mountain View Cemetery, 1051 Willow Creek Rd., Prescott, Arizona. There will be no service. All wishing to attend are welcome.