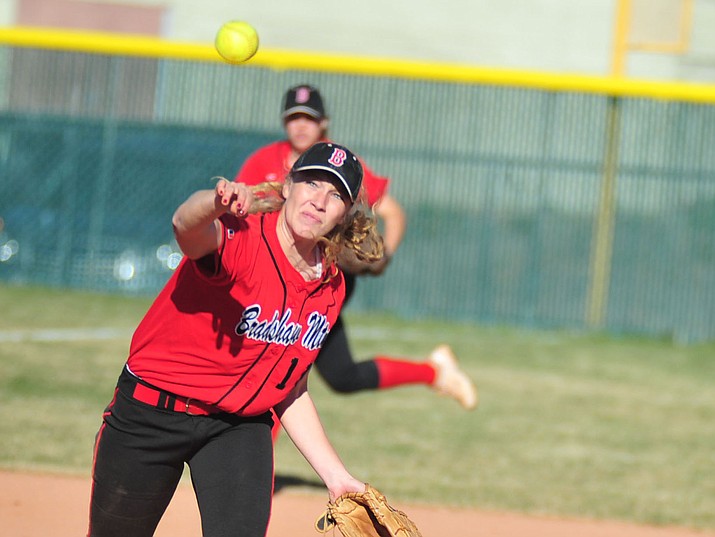 Bradshaw Mountain's Jacie Hambrick throws to first March 25, 2019. Hambrick struck out 16 batters in a 12-0 win for the Bears over rival Prescott on Tuesday, April 9, 2019, in Prescott. (Les Stukenberg/Courier, file)

PRESCOTT — No matter the sport, a heated battle is almost always guaranteed whenever Prescott and Bradshaw Mountain meet head-to-head.

But in this installment of the fierce rivalry, the Badgers had absolutely no answers for ace pitcher Jacie Hambrick, whose staggering 16 strikeouts helped lead the Bears to a commanding 12-0 road win on Tuesday in Prescott.

“She always has a plan,” Bears head coach Sharon Haese said of Hambrick. “She can put it in another gear when she needs to and add a couples miles an hour. She can also throw a changeup over, which was just fantastic tonight. She just continues to keep batters off balance and when you do that, you’re going to get a lot of strikeouts.”

Despite giving up two runs in the opening inning, Badgers pitcher Hannah Irvine managed to keep the game within reach and limit a Bradshaw Mountain team that had defeated its opponent by a double-digit margin in nine of its 14 games this season.

However, Hambrick responded by getting the 1-2-3 in the first and fanning six straight in the second and third innings.

After the Bears tacked on a run in the third inning to make it a 3-0 game, Prescott head coach Randall Bryan opted to replace Irvine with Francesca Larson in the fifth, hoping to keep the Bradshaw Mountain batters guessing.

Unfortunately for Prescott, Bryan’s strategy was immediately nixed as Larson surrendered a three-run homer to Madison Duryea followed by a sacrifice RBI. This ultimately blew the game open and extended the Bears’ lead to 7-0.

In the sixth frame, Makayla Reyes came in to pitch for the Badgers, but Bradshaw Mountain kept pouring it on for the remainder of the contest. Hambrick continued her masterful performance in the circle, completing the game while giving up no runs on only five hits en route to the 12-0 victory.

With the loss, Prescott continues its plummet toward rock bottom of the Grand Canyon region as they drop to a 0-9 record (3-10 overall). Bradshaw Mountain, on the other hand, still sits firmly atop the standings with a 9-1 region record and a 14-1 overall record, which has also garnered them the No. 4 spot in the 4A rankings.

“I just want to see now how they respond with the games that we have left,” Bryan said of the Badgers going forward. “I still think this team has a lot of character, and hopefully we can turn around and win some games at the end, and learn what we haven’t done well in our mistakes to get ready for next year.”

Bradshaw Mountain will host Prescott on Thursday to finish off the two-game series this season. First pitch is set for at 3:45 p.m.