In many states like Arizona, legalizing sports betting hinges on tribes 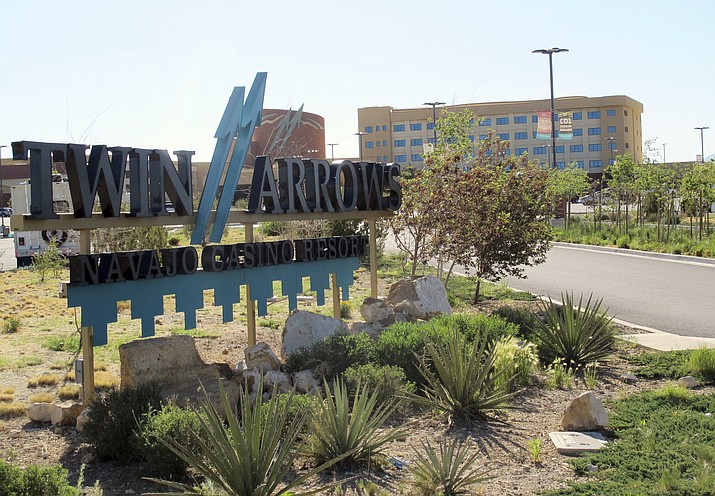 This May 15, 2018, file photo shows the Navajo Nation's Twin Arrows Casino, east of Flagstaff, Ariz. The Navajo Nation is pushing for a measure that would give tribes the exclusive right to operate sports betting off their reservations in exchange for sharing winnings with the state. Tribes could put betting kiosks in non-tribal bars and private clubs. (Felicia Fonseca/AP, file)

Native American tribes have emerged as key players in the legislative debates over whether states should legalize sports betting, with some opposing the idea because it could threaten their casinos and others supporting legalization only if they retain a monopoly.

In many states, tribes are fighting sports betting or taking a go-slow approach because they worry it might force them to reopen decades-old agreements that give them exclusive rights to operate casinos and offer certain forms of gambling.

"The tribes have a major-league seat at the table," said Bill Pascrell III, a lobbyist for gambling interests seeking legalized sports betting across the country. 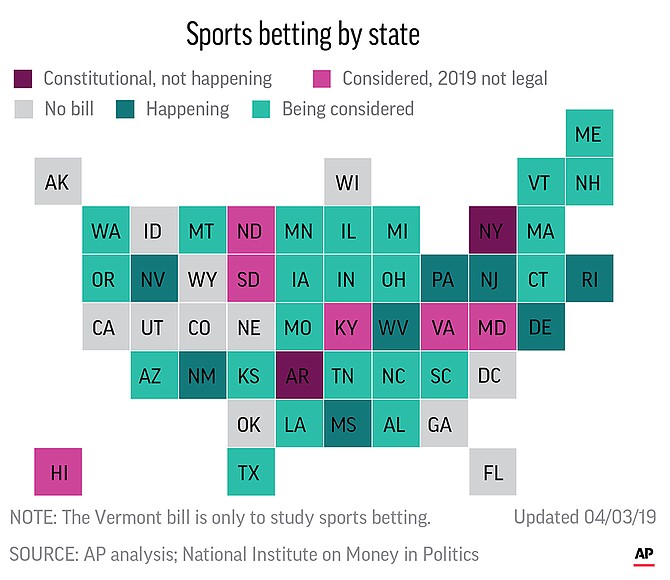 The status of sports betting in each state. (AP graphic)

Six states have joined Nevada in allowing sports gambling since a U.S. Supreme Court ruling last year opened the door to its expansion. Legalization is being considered in more than 20 others.

In Minnesota, a bill seeking to legalize sports betting cleared its first hurdle earlier this year, passing a committee in the state Senate. But that's likely to be as far as the measure goes, in large part because the state's politically potent tribes oppose it.

Gambling "is the only successful economic development tool the tribes have ever had," John McCarthy, executive director of the Minnesota Indian Gaming Association, told the committee.

The tribes, which operate 21 casinos and have given millions in campaign donations, are especially concerned about allowing sports betting on mobile devices, which they fear could invite wider internet gambling that could threaten their casinos.

In Texas, the only sports betting bill is almost certain to die. It was introduced by a Democrat, the minority party, in a state where casino operators from neighboring Oklahoma and Louisiana have donated millions to keep gambling out. Two Oklahoma tribes, the Chickasaw and Choctaw nations, have given more than $5 million to Texas officeholders and candidates since 2006.

Sports betting measures introduced in Arizona and Washington state are also considered longshots, mostly because of tribal ambivalence or opposition.

In some states where tribal gambling is prevalent, sports betting bills have not been introduced at all. That's the case in Oklahoma, as well as California and Florida, which are home to politically influential tribes that have been cool to the idea.

But elsewhere, casino-operating tribes are the ones leading the legalization efforts.

The Mohegan and Mashantucket Pequot tribes have exclusive rights to casino gambling in Connecticut and are working with the governor's office to add sportsbooks. Two tribal casinos in New Mexico began running sportsbooks after the Supreme Court decision, even though the tribes never received explicit permission from the state.

In North Carolina, a bill pushed by the Eastern Band of Cherokee Indians would allow the tribe to offer betting on sports and horse races at its casino near Great Smoky Mountains National Park, without forcing it to make any substantial concessions.

Conservative religious groups have warned about the dangers of more gambling, but the legislation has so far sailed through committees in the state Senate. The tribe is one of the state's top political contributors.

"They've been incredibly good stewards of the revenue, and it's transforming that community," he said.

Like other powerful interest groups, tribes ensure they have access to lawmakers and governors through political contributions. Tribal governments have contributed more than $114 million to state-level candidates and political committees over the past decade, according to an Associated Press analysis of data compiled by the National Institute on Money in Politics.

In some states, including California, allowing sports betting would probably require a constitutional amendment. That and tribal reluctance means the NBA's Sacramento Kings will have to wait longer, perhaps indefinitely, to allow gambling in a suite the team dedicated for that purpose inside the Golden 1 Center arena.

Arizona is the rare example of a state where tribes are the key players in the legalization debate but are on opposite sides.

The Navajo Nation is pushing for a measure that would give tribes the exclusive right to operate sports betting off their reservations in exchange for sharing winnings with the state. Tribes could put betting kiosks in non-tribal bars and private clubs.

But other Arizona tribes oppose the legislation, saying it could hurt existing casinos on reservations.

Lawmakers in many states are not eager to push the issue without support from tribes, said Hilary Tompkins, a former solicitor with the Department of the Interior, which oversees the Bureau of Indian Affairs.

"It's not worth the pain of engaging in a fight with the tribes in their states," Tompkins said. If states "open the door to non-tribal sports betting, the tribes are going to say, 'We're going to reduce our revenue to you.' And that could end up in court."

Minnesota state Sen. Roger Chamberlain, chairman of the tax committee that passed this year's sports betting bill, acknowledged that it will be virtually impossible for the measure to succeed without backing from the tribes.

"They've got momentum and are telling folks they don't want it to go anywhere," he said. "I think that's a little unfair, but we're willing to talk with them and protect their interests."