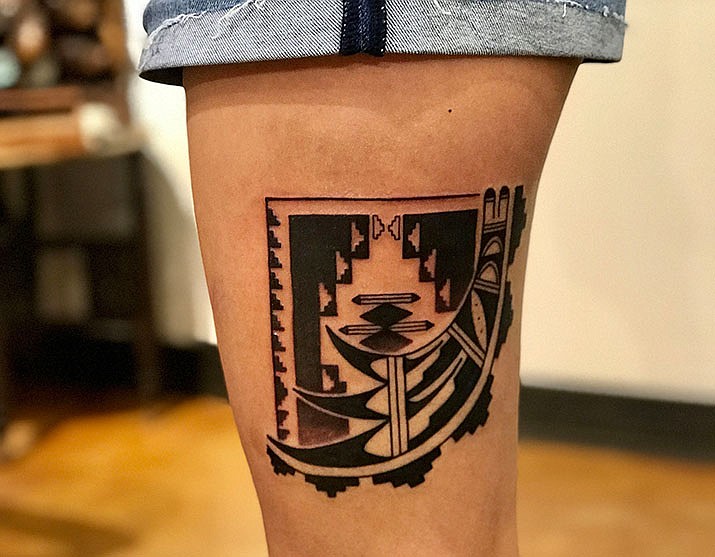 Tattoo art by Landis Bahe whose work will be featured in the Smoki Museum’s Contemporary Native Arts Festival. (Landis Bahe/Courtesy)

Smoki Museum Executive Director Cindy Gresser was sitting on the museum’s front porch years ago, looking at the surrounding skate park, the field and the buildings, when she had a realization.

“We have the perfect footprint for a major event right here,” Gresser said. “We can bring to life everything that contemporary Native artists are doing today.”

The seeds planted in Gresser’s mind that day will come to fruition Saturday and Sunday, April 13-14 with the inaugural Contemporary Native Arts Festival, which Gresser called a dream come true. 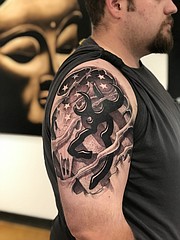 Tattoo art by Landis Bahe whose work will be featured in the Smoki Museum’s Contemporary Native Arts Festival. (Landis Bahe/Courtesy)

It is being staged on with the support of APS, Courier Cares, the Arizona Community Foundation, Springhill Suites and other community partners who have come together because it is something Prescott needs and what the community wants, she said.

Deciding on who to have be a part of the event came from figuring out the best kinds of entertainers, Gresser said.

“… who was really going to represent what we’re trying to put forward here which is understanding and respect for the indigenous cultures of the Southwest, not just in the past, but today and into the future and where they’re going,” she said. “That’s what this is all about.”

Admission is $5 per day and includes everything.

The goal is not just to make this an annual event, but for it to be part of the transformation that has been ongoing at the Smoki Museum for 16 years and that will continue into the future, Gresser said. Museum staff and supporters have big plans, and it is all about improved communication and greater understanding in how the Smoki Museum is very different than what it was 20 years ago, she said.

Lew Rees, events & marketing director for Western News & Info, said he is thrilled and honored to have Courier Cares be a part of and support the event. He truly believes it is going to be one-of-a-kind, Rees said.

“We encourage everyone in our region … to be there,” he said. “It’s going to be extremely unique.”

Gresser said she hopes everybody comes to the festival, citing the different genres of music, dance performance, fashion, powwow and forms of art that will be present.

“There’s literally something for everyone at this festival,” she said. “There’s a million reasons to come out.”

For more information and a complete schedule, visit www.smokimuseum.org/cnaf-2019.